You are here: Home / Entertainment / Alice Through The Looking Glass Press Conference

A quaint little tea party was the setting for the Alice Through the Looking Glass press conference in Beverly Hills this past weekend, where we sat with Anne Hathaway (“The White Queen”), Mia Wasikowska (“Alice Kingsleigh”), Director James Bobin, and Producer Suzanne Todd as they shared their thoughts behind taking us back to Underland. 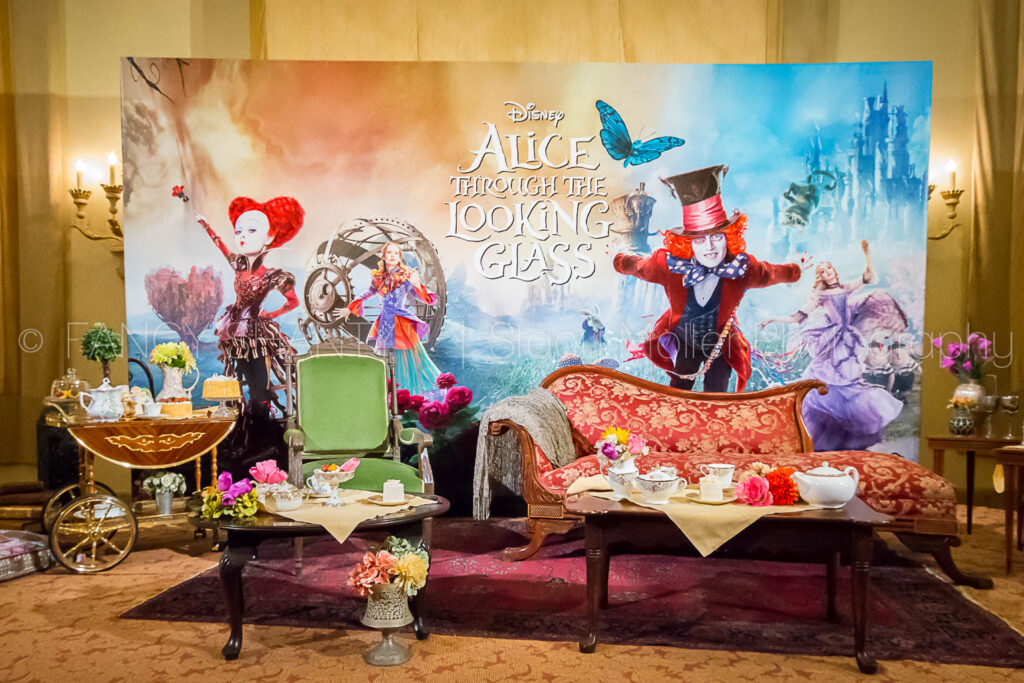 As we sat with the cast though we learned that there was much more to the film's story than just returning to Underland. The deeper message within the film is teaching girls that it's okay to be strong about you convictions, and that anything is possible if you put your mind to it and follow your dreams. 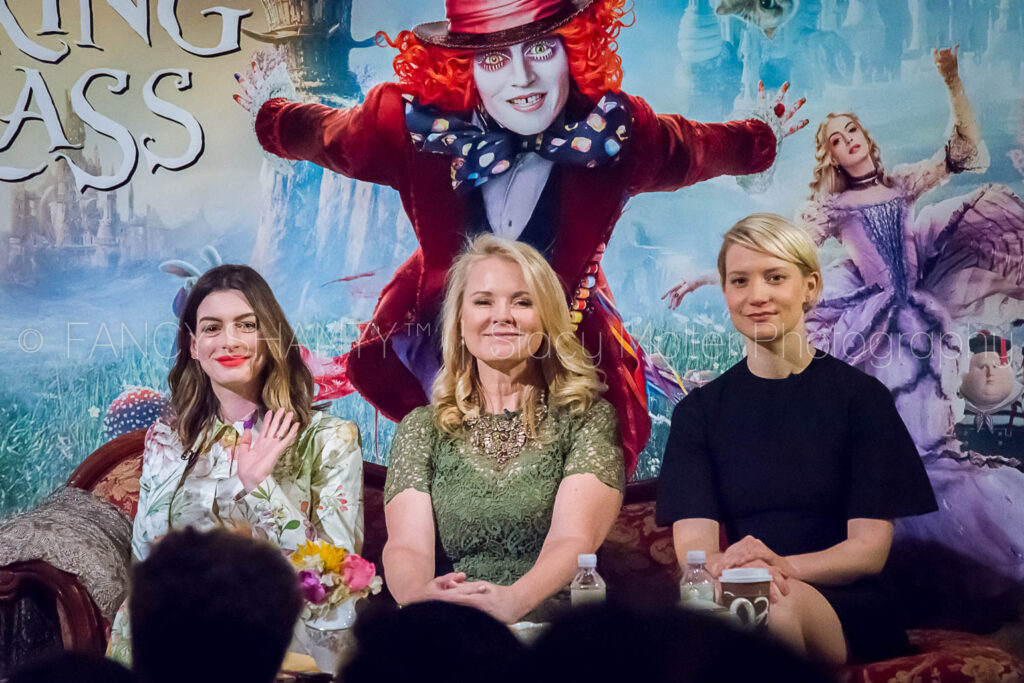 Suzanne Todd, ‘I think we are all really happy that we get to be a part of the conversation talking about a big summer movie, and also talking about female empowerment. Hopefully, that is a step towards change.'

While Anne Hathaway shared, ‘We need to stop the narrative of saying that women lose power as they get older. I am becoming way more powerful as I get older, and I am tired of myself feeling the opposite. We need everyone to take the narrative back like Alice does.'

‘There are so many messages in the film that I think are really great. There are always things we wished that we had done in the past, but the best way to have peace with it is to accept it, move forward, and not try to change it.' added Mia Wasikowska.

Alice Through the Looking Glass opens in theaters everywhere this Friday May 27th.

Q: Suzanne, why did you decide to do this movie, now?

Suzanne Todd: Well, it took us a long time after the first movie to come up with an idea that we felt was really worth taking on. As everyone here knows, movies are very difficult to make. We went back to the literature. We went back into what was so popular for a hundred-fifty years and themes came up that we were interested in, that Linda Wolverton, the screenwriter, wanted to take on, and when James came on board, ideas that he was interested in.

We focused on what’s in the movie now, which is Time and the preciousness of time, and the importance of spending time with loved ones, and also what a pretty, kick-ass girl can do if she sets her mind to it. 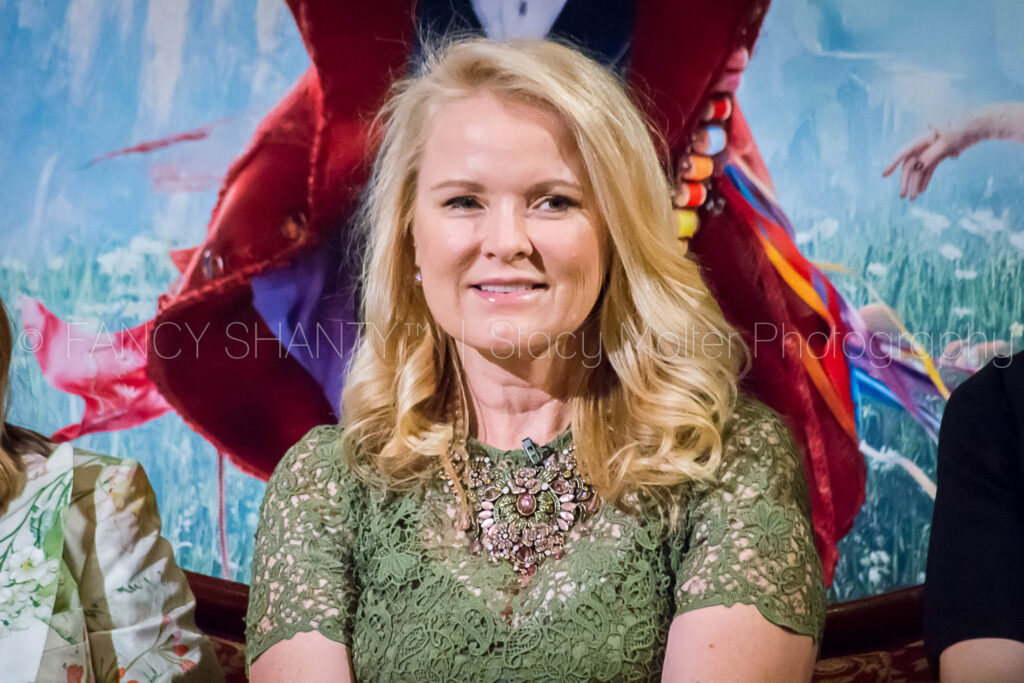 Q: Mia, Alice is the captain of her own ship, and everyone's counting on her to save the Hatter, how do you feel about how strong this character is?

Mia Wasikowska: Yeah, it was great. At the beginning of this film she has been traveling around the world for the last two years. She’s the captain of her own ship, so she’s coming from a very empowered place.

I just love that she has a very strong sense of who she is, despite the fact that expectations for her are really low when she returns to England. She’s able to hold onto that sense that she’s worth more than what other people want for her. Yeah, I think she’s great. 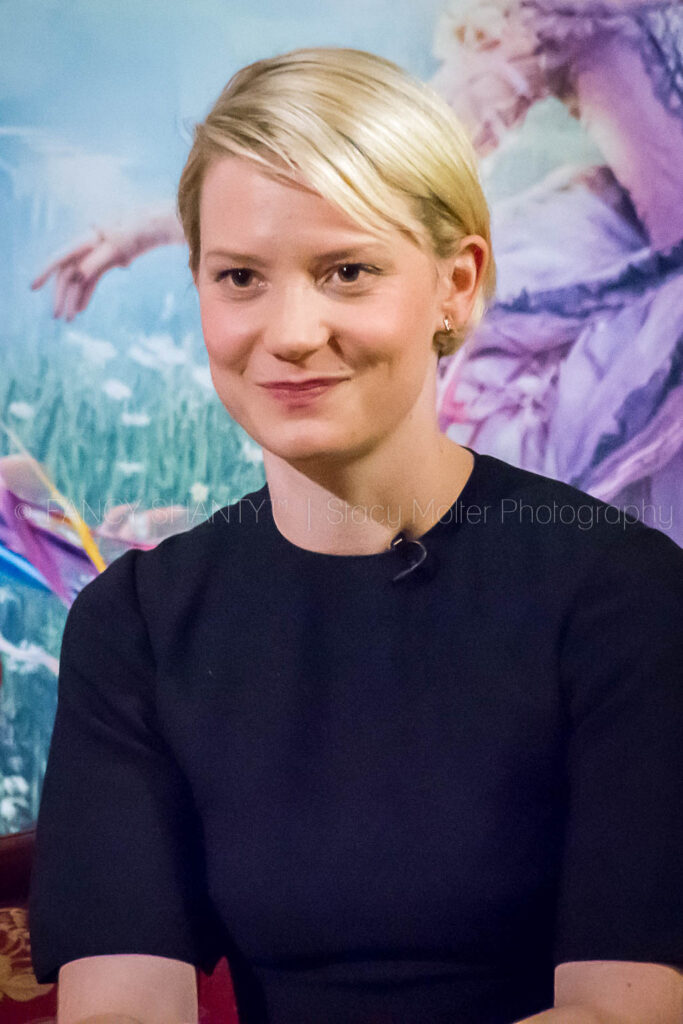 Q: James, you took this topic from Tim Burton and you really made it your own. What made you want to direct this film?

James Bobin: I think when you grow up with Alice, it’s part of your life. I really felt like I knew who Alice was for me. The Alice in this film is really my idea what Alice would be like if she was grown up. I remember reading Lewis Carroll as a kid, and he made me laugh.

Lots of stuff I’ve done in the past has been comedy. I wanted to try to bring a little of that to this story. I always thought Carroll was the author of surrealist, absurdist humor, which was pretty much a direct line to Monty Python. Again, part of my growing up. How do you not say yes to this film? 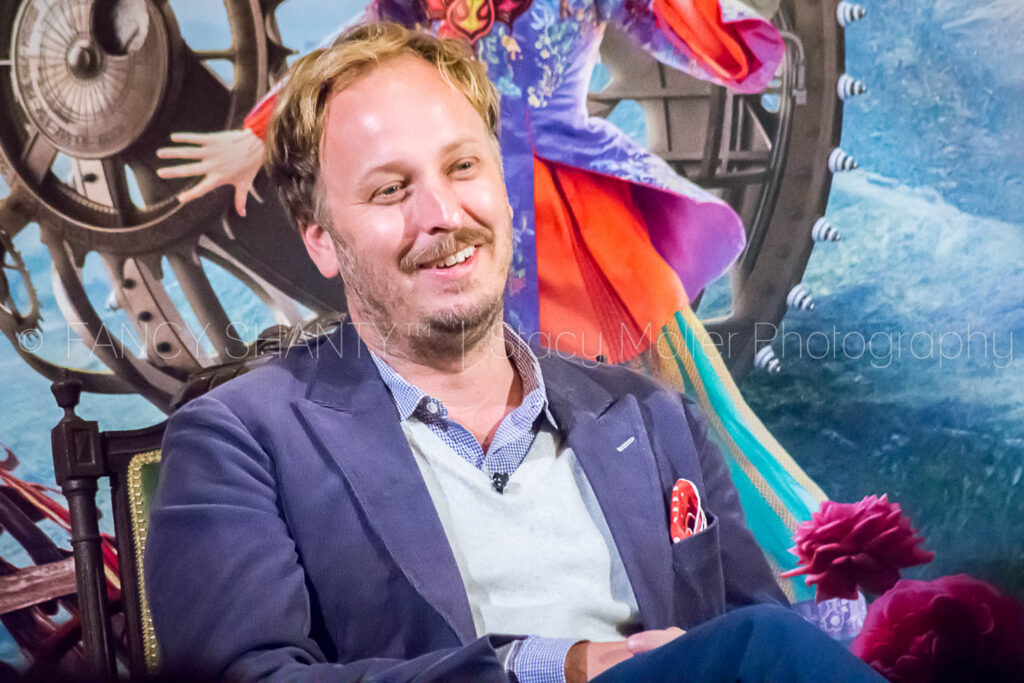 Q: Anne, was it fun to go back and explore the younger Queen?

Anne Hathway: It was fun to learn that she’s not perfect. I think she’s lovely in the first one, but a bit oppressively good.

It was nice to know that like everyone, she’s got a past. She has regrets, and she feels shame. She feels guilt, and that we forgive her of these things. I actually was really thrilled that we were trying to see what the deeper issues were about these characters that look so fantastical but feel so believable. 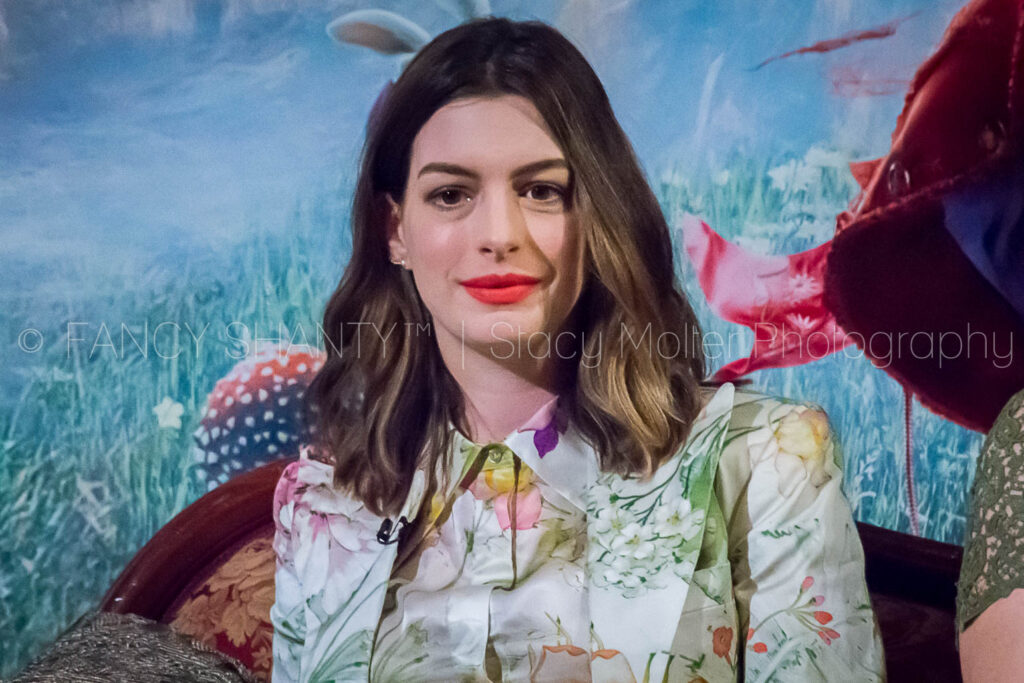 Q: For the ladies, can you talk a little about the incredible wardrobe of the film. Did you have any favorite pieces that you enjoyed wearing?

Mia Wasikowska: Designer Colleen Atwood is brilliant, and obviously such a genius, but also quite evil because they’re very uncomfortable costumes. In this one I got to wear lots of trousers, and things that were a lot more accessible. Alice in this film is very active.

Anne Hathaway: I thought that Colleen’s costume probably created my character. I had certain one-note ideas about who she was, and then as I found the dress I thought, ‘Oh, she’s air.’ I also started to think about the relationship between her and Helena and I thought, if you have a family member who has a very large personality, who has a lot of emotions, you compensate by taking up less space.

I thought, here’s somebody who’s turning herself into almost weightlessness. Yet, it’s still so ornamented. I just thought it’s very rich and very airy. That’s how I kind of came up with my airhead. 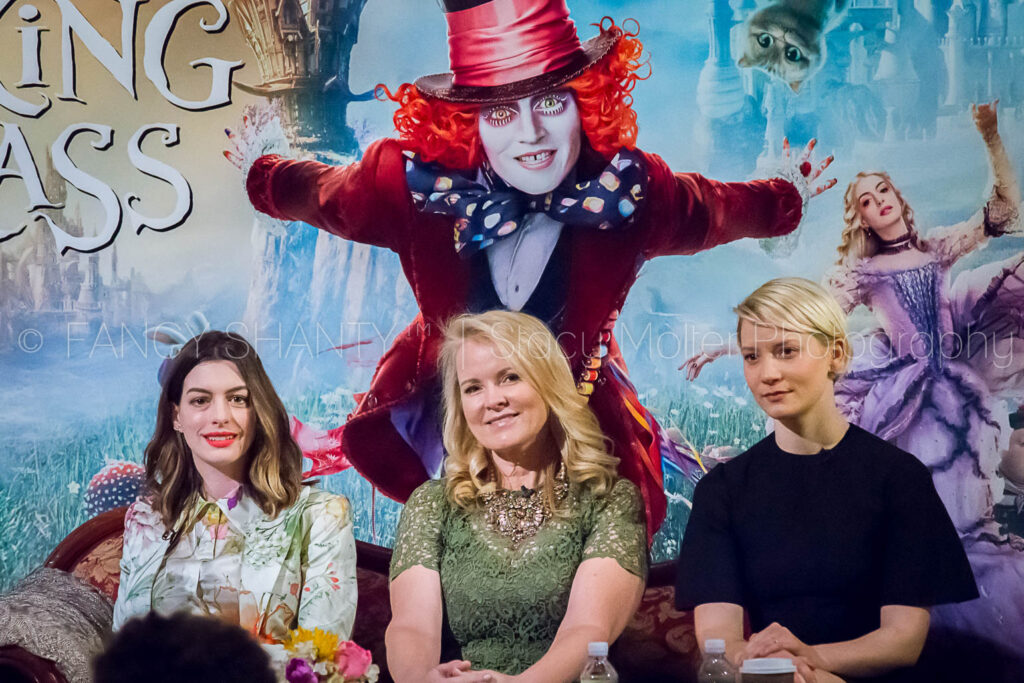 Q: James, how did you pay homage to what comes before and retain that essence and put your spin on it.

It’s a question of tone, and tone is the result of a million decisions you make over the period of production of the movie.

It’s something that we’re incredibly aware of because obviously Tim’s movie looks so beautiful, and there’s a certain brand to his type of work. This film is set in a different time period and geographical location, so I was allowed to bring something of myself to it, as well.

About Alice Through the Looking Glass

Alice Kingsleigh (Wasikowska) has spent the past few years following in her father’s footsteps and sailing the high seas. Upon her return to London, she comes across a magical looking glass and returns to the fantastical realm of Underland and her friends the White Rabbit (Sheen), Absolem (Rickman), the Cheshire Cat (Fry) and the Mad Hatter (Depp), who is not himself. The Hatter has lost his Muchness, so Mirana (Hathaway) sends Alice on a quest to borrow the Chronosphere, a metallic globe inside the chamber of the Grand Clock which powers all time. Returning to the past, she comes across friends – and enemies – at different points in their lives, and embarks on a perilous race to save the Hatter before time runs out.

Alice Through the Looking Glass reunites the all-star cast from the worldwide blockbuster phenomenon, including: Johnny Depp, Anne Hathaway, Mia Wasikowska and Helena Bonham Carter along with the voices of Alan Rickman, Stephen Fry, Michael Sheen and Timothy Spall. We are also introduced to several new characters: Zanik Hightopp (Rhys Ifans), the Mad Hatter’s father and Time himself (Sacha Baron Cohen), a peculiar creature who is part human, part clock.

Directed by James Bobin, who brings his own unique vision to the spectacular world Tim Burton created on screen in 2010 with “Alice in Wonderland,” the film is written by Linda Woolverton based on characters created by Lewis Carroll and produced by Joe Roth, Suzanne Todd and Jennifer Todd and Tim Burton with John G. Scotti serving as executive producer. 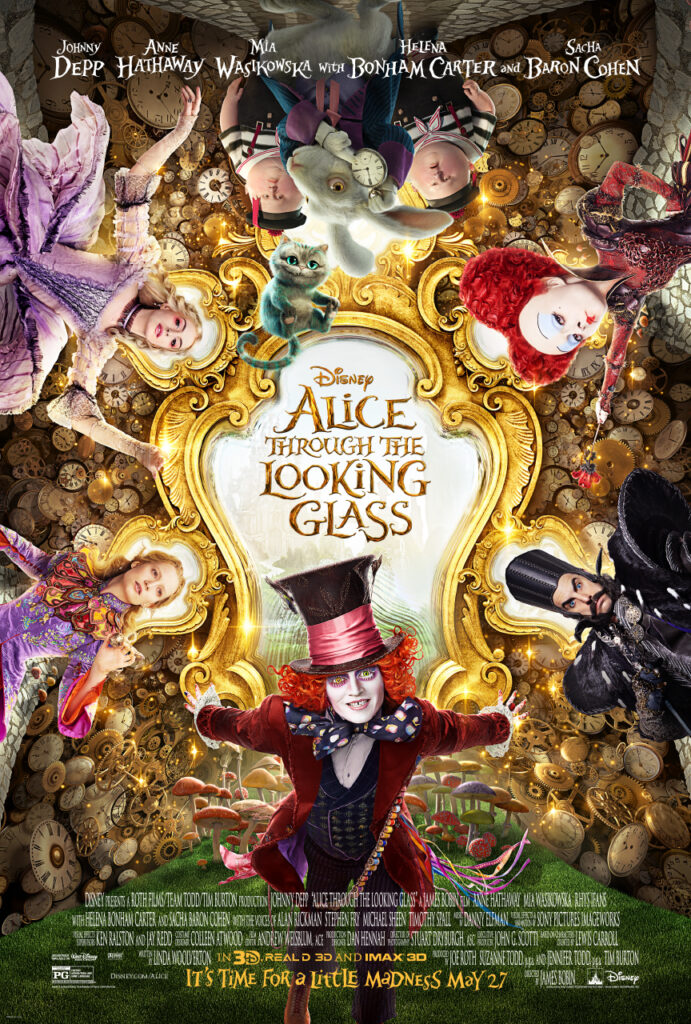