How slow are sloths? How does a giraffe run? How does a tiger dance? We learned this and more at the recent early press day for  Disney's newest animated film, Zootopia. 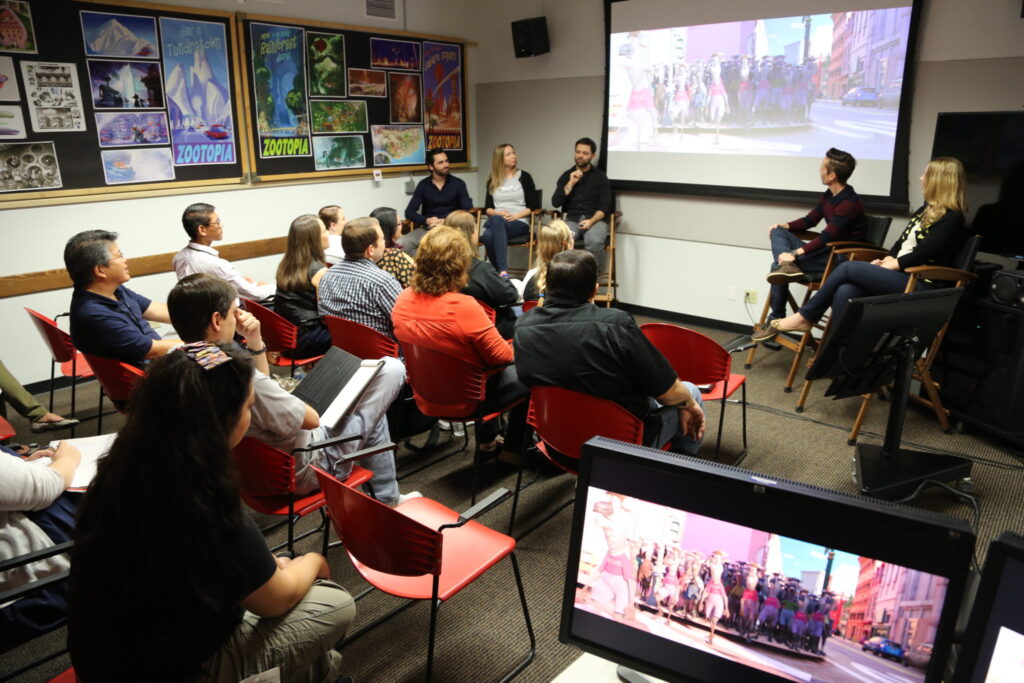 At the recent Zootopia early press day we asked Head of Animation Renato dos Anjos and Animation Supervisors Kira Lehtomaki, Nathan Engelhardt, Jennifer Hager and Chad Sellers, who, along with the talented artists of the animation team, what it took to merge animal and human behavior to create the unique and varied performances of the animals of Zootopia.

To come up with the animation for Zootopia, the animators challenged themselves to look at life instead of drawing their animations from existing animated characters. To do this, they took a trip to Walt Disney World and Kenya to study animal life in its natural environment.

It was at this time the animators realized they needed to push the characters further. They needed to be specific to each species and capture the essence of how each animal moves, and integrate this movement into each character.

This biggest challenge for the animators was to get the feel of natural movement from a four-legged animal into a two-legged animal. After experimenting and testing, they realized that by capturing an animal's head movement and cadence they could get the feeling of the animal even if the animated animal didn't move exactly like the real animal.

In addition to motion, animators also had to look at specific animal behavior like eating. Even though the animals in Zootopia have hands, animators brought the feeling of real life by allowing the characters to eat with their tongues and lips as they would in nature.

When constructing the characters Nick Wilde and Judy Hopps, the animators needed to find the correct balance between animal personality and human emotion. With Nick Wilde, the red fox in Zootopia, the animators wanted to make sure they weren't applying too much animal in daily actions as simple as waking and stretching in the morning. 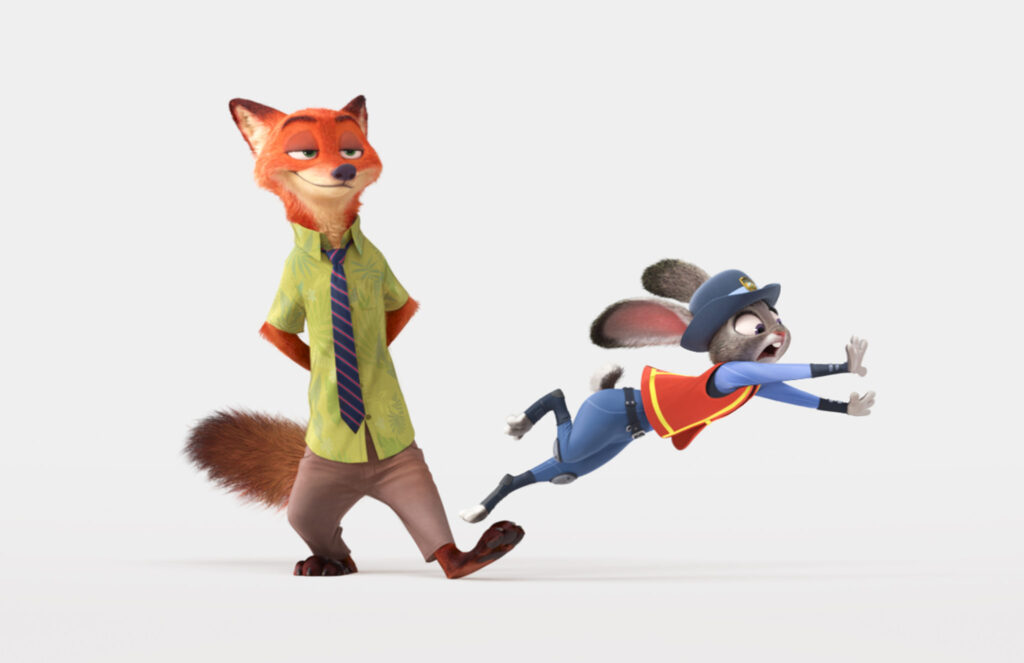 John Lasseter, who loves animation, lent his hand in the help with the animation of this film and these characters. At one point, when John had a specific scene he wanted to really come through in the film, he shot reference of himself and acted out a scene of Nick eating a tiny piece of cake for the animators.

To help the animators focus on scale, John made a little piece of cake, a little plate out of a nickel, and a tiny little fork. The animators took that film and worked directly from it to create the scene you will see in the film.

In doing research for Judy Hopps, the animators were surprised to learn how athletic bunnies are. They saw the unique jumping bunnies do called binking, where bunnies jump high in the air and then kick out their legs, and since Judy is the smallest animal on the police force the animators took this asset, her powerful legs, to help her stand next to the larger cops on the force.

In addition to Nick Wilde and Judy Hopps, the animators studied the myriad of animals within the film and shared with us some of their favorite animal characteristics they had the opportunity to bring to life in the film.

The animators learned the African Cape Buffalo are one of the scariest, most deadly animals in Africa, and they have a bit of a horrible temper. If they see someone approaching, they'll stop, turn, and just stare you down to intimidate you. This behavior aligned perfectly with Chief Bogo, an officer with the Zootopia police department.

With animals like wildebeests, the animators realized the herd always waits for one member to take initiative before the entire herd crosses an obstacle like a river. To give a nod to this specific behavior, the animators adapted this behavior in the city of Zootopia when the wildebeests wait to cross a street.

For Officer Clawhauser, a cheetah and the fastest animal in Zootopia, the animators really wanted to bring to life the piston-like legs that power the cheetah's run and the stabilized head that's isolated from the rest of the body. Though Officer Clawhauser isn't quite as in shape as a natural cheetah, you will still be able to see the similarities within the run.

The fun, playful, ropy, erratic quality of the weasel lent itself nicely for the animation of the weasel, a thief that runs around all over Zootopia. As the weasel runs, you can see the lower part of the torso bounce around and capture what the actual creature does in real life.

Portions of this material have been provided by Walt Disney Studios. Photo by Alex Kang. ©2015 Disney. All Rights Reserved.