Falling in love with Mexico is easy. How do I know this? Our family fell in love with Mexico a few years ago when we visited the small fishing town of Manzanillo, Colima. The people, the traditions, the food, and the breathtaking landscapes created a beautiful paradise we never wanted to leave. When I heard Disney•Pixar was creating a film celebrating everything we love about Mexico, I couldn't wait to share everything about this film with our children, and it was no surprise to learn the Disney•Pixar team fell in love with the same country we hold so dear in our hearts.

THE LAND OF THE DEAD – In Disney•Pixar’s “Coco,” aspiring musician Miguel (voice of Anthony Gonzalez) finds himself in the Land of the Dead—a rich and vibrant community featuring bridges of marigold petals. Directed by Lee Unkrich, co-directed by Adrian Molina and produced by Darla K. Anderson, Disney•Pixar’s “Coco” opens in U.S. theaters on Nov. 22, 2017. ©2017 Disney•Pixar. All Rights Reserved.

Coco: A Love Letter to Mexico

On our recent press trip to San Francisco for the Disney•Pixar Coco event, we had the opportunity to learn just how much Director Lee Unkrich, Writer and Co-Director Adrian Molina, and Producer Darla K. Anderson fell in love with Mexico and the traditions of Dia de los Muertos. From the original idea of creating a film based on the Day of the Dead to preserving the culture of the people, Disney•Pixar’s Coco will warm audiences hearts as the film celebrates the core of this holiday celebration, family. Disney•Pixar’s Coco opens in U.S. theaters on Nov. 22, 2017. 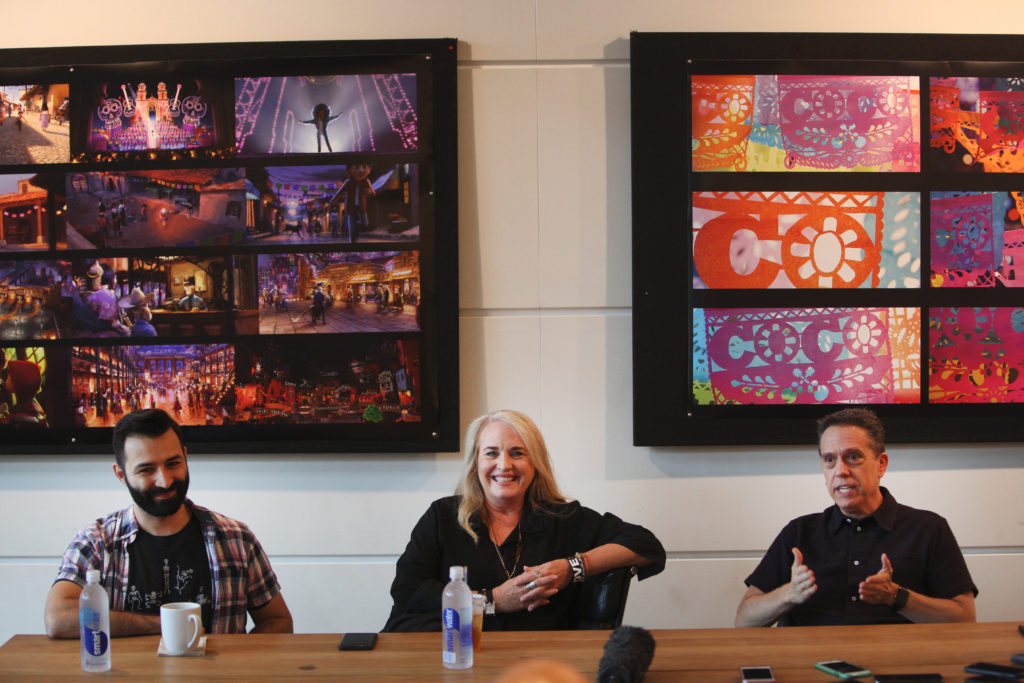 The Idea of Coco is Born

When Lee Unkrich first pitched the idea for film Coco back in September of 2011, John Lasseter was really excited about the notion of setting a story against the Dia de los Muertos tradition. The story felt unique to John and, while it didn't get a full green light right off the bat, it did open up the opportunity for the team to head down to Mexico and begin research.

By the way, if you're not familiar with how Disney animated films are made, they always begin with research. Research trips that look like a lot of work, and a lot of fun. Trips that I would die to be on!

For Finding Dory, the team headed to the Monterey Bay Aquarium in Monterey, California, to learn everything they could about sea life. For the short Lava, the team found themselves researching towering volcanos and music from the South Pacific Islands in Hawaii. And, much like this research trip to Mexico for the film Coco, the team head to Fiji, Samoa, and Tahiti for the film Moana to assure they preserved the heritage and culture of the people throughout the film.

FAMILY REUNION – In Disney•Pixar’s “Coco,” aspiring musician Miguel (voice of Anthony Gonzalez) makes an impulsive choice that sets off a series of events that ultimately lands him in the Land of the Dead where he’s able to interact with his late family members, including Tía Rosita (voice of Selene Luna), Tía Victoria, Papá Julio (voice of Alfonso Arau), and Tío Oscar and Tío Felipe (both voiced by Herbert Siguenza). Disney•Pixar’s “Coco” opens in U.S. theaters on Nov. 22, 2017. ©2017 Disney•Pixar. All Rights Reserved.

While Coco was the working title for the film, there’s always been a certain mystery to the name. Who's Coco? Early on in the film, you'll discover that Coco is Miguel’s great grandmother. She’s the oldest person in this family and the keeper of the family's stories and memories. Someone who symbolizes the spirit and themes of the film.

Now, I know you're wondering why did the filmmakers name this movie after Miguel’s great grandmother? Well, you'll just have to wait and see, and in the end, the filmmakers have promised, we'll all learn why Coco earns and deserves having the movie named after her. 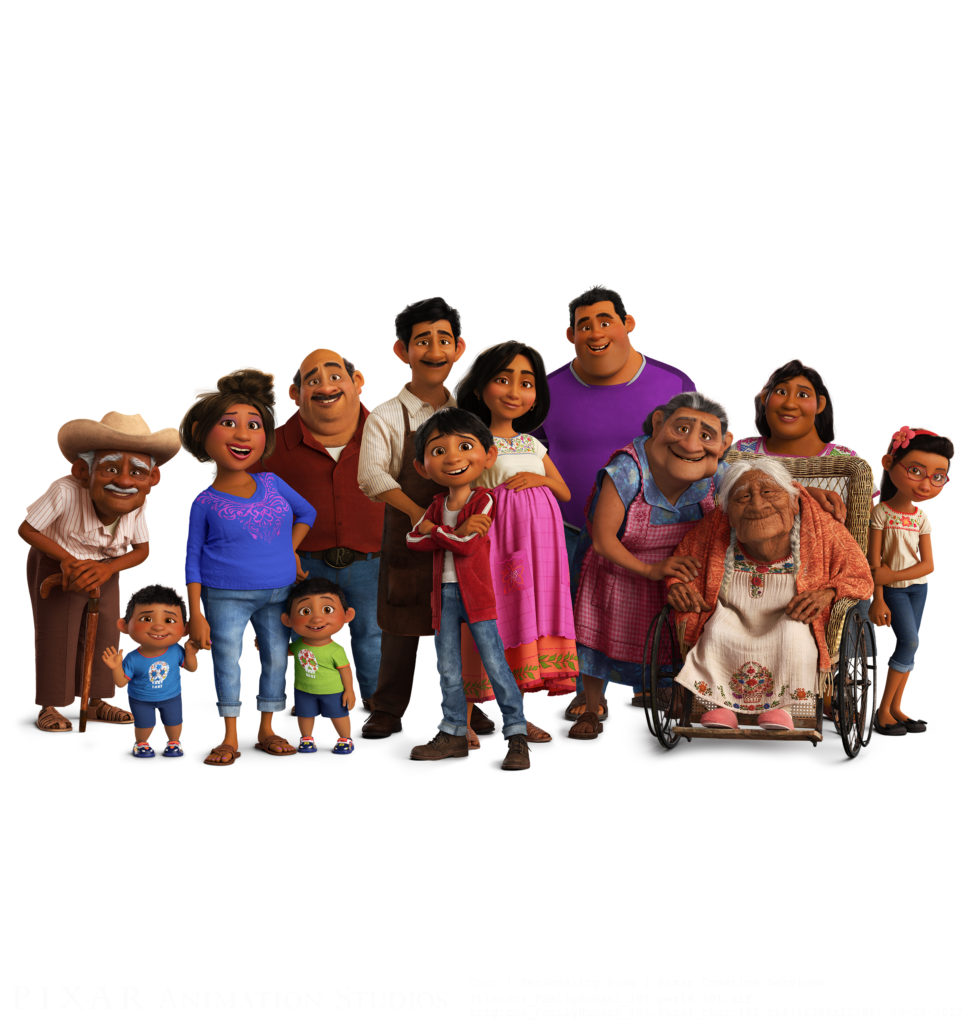 A Love Letter to Mexico

Though the characters in the film speak English, filmmakers wanted to infuse some of the languages into the storytelling because it's so much a part of the culture. They tried to use Spanish anytime where the meaning was kind of evidence, and even if you don’t speak the language you understand what's being said. Like when mama says, ‘Oh, Mijo.' audience will be able to see it’s a gesture of affection.

A choice was made early on that any and all signage would be in Spanish unless it was something where there was storytelling involved in that moment. In that case, those shots will be translated into different languages all over the world, but the bulk of it will be in Spanish because the story takes place in Mexico and, since it’s a Spanish speaking nation, they wanted to have that authenticity in the film.

MAGIC – When aspiring musician Miguel (voice of Anthony Gonzalez) finds himself in the Land of the Dead, all he needs to return to the Land of the Living is a blessing from a family member, a magical marigold petal and a promise he’s not sure he can make. Directed by Lee Unkrich, co-directed by Adrian Molina and produced by Darla K. Anderson, Disney•Pixar’s “Coco” opens in U.S. theaters on Nov. 22, 2017. ©2017 Disney•Pixar. All Rights Reserved.

While the first story that was developed was completely different than what the final story became, Coco, is very much the filmmakers' love letter to Mexico, reaffirming how much they love and appreciate the culture and the people and the traditions that come from this beautiful country. It's a very cultural specific movie and it’s very enriched with what it talks about; tradition, love, family, and friendship.

Despite his family’s baffling generations-old ban on music, Miguel (voice of newcomer Anthony Gonzalez) dreams of becoming an accomplished musician like his idol, Ernesto de la Cruz (voice of Benjamin Bratt). Desperate to prove his talent, Miguel finds himself in the stunning and colorful Land of the Dead following a mysterious chain of events. Along the way, he meets charming trickster Hector (voice of Gael García Bernal), and together, they set off on an extraordinary journey to unlock the real story behind Miguel's family history. Directed by Lee Unkrich (“Toy Story 3”), co-directed by Adrian Molina (story artist “Monsters University”) and produced by Darla K. Anderson (“Toy Story 3”).