Director Jon Favreau's biggest fear when filming ‪Disney's The Jungle Book was dropping the ball for audiences who love the story. He didn't want to disappoint as he told his story of The Jungle Book. 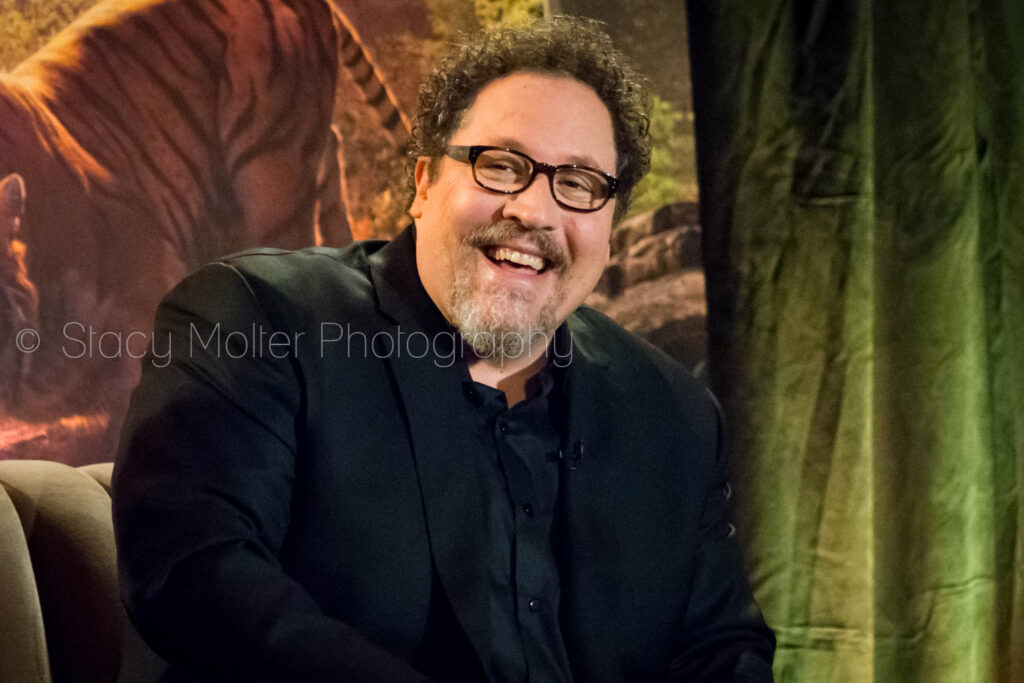 What Jon created was a visually stunning masterpiece that blends live-action with photorealistic CGI animals and environments that pays homage to the original animated film, in an original beautifully artistic story for our generation. As we sat with the cast from The Jungle Book, we had the opportunity to learn more about Jon's passion for this film.

Listening to Jon Favreau talk about a project he loves is amazing! He exudes passion with every word he says, and his love for Disney, specifically upholding Walt's legacy, is undeniable. Jon is one of my favorite persons in Hollywood, and I can't wait to learn more about his next project with Disney, especially the just announced Jungle Book 2.

Creating The Jungle Book for a new generation.

The Kipling stories were huge when Jon Favreau was growing up, and he had a strong childhood connection to Disney's animated film, as many of us still do. But Jon didn't want to retell the same story from fifty years ago. Instead, he wanted to tell this story in a different way. To try to visually bring to the big screen what existed in Kipling's imagination when he was growing up. 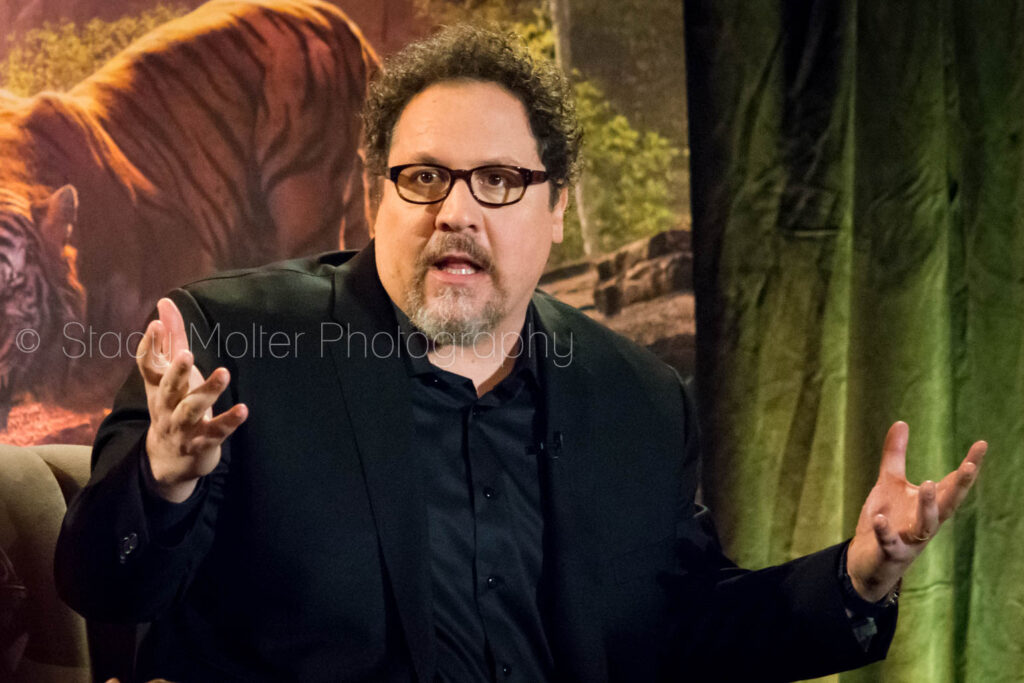 Casting the voices of Bagheera, Raksha, and Akela.

When it came to casting, Jon stuck a chord with three actors in particular, Sir Ben Kingsley, Lupita Nyong'o, and Giancarlo Esposito, who spoke fondly about Jon as he approached them for their parts.

Sir Ben Kingsley revealed to us how the captain in charge of the project always brings his or her take to the project, and he knew Jon well enough, and is fond enough of him to know his taste in judgement. Jon's perception of humanity, childhood, and storytelling completely concurred with Sir Ben Kingsley's own beliefs. 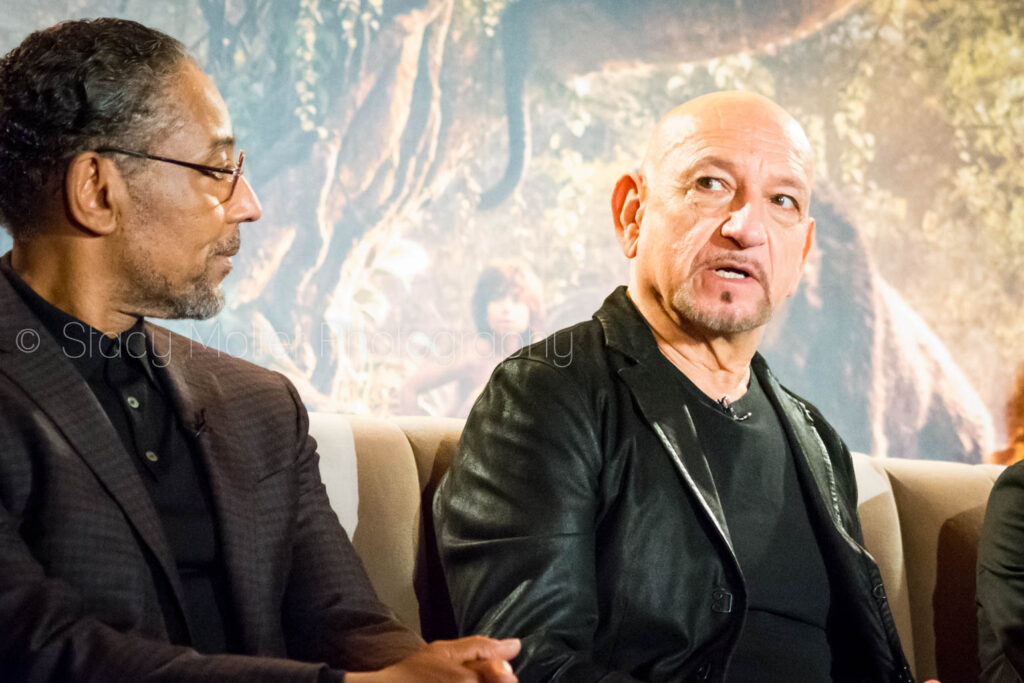 While, for Lupita Nyong'o, she felt Jon's compassion when he spoke about the characters, the same compassion we saw as Jon spoke open-heartedly about his film.. The heart behind his vision and the love for each character he was going to bring to life was what made Lupita's decision to play Raksha easy. 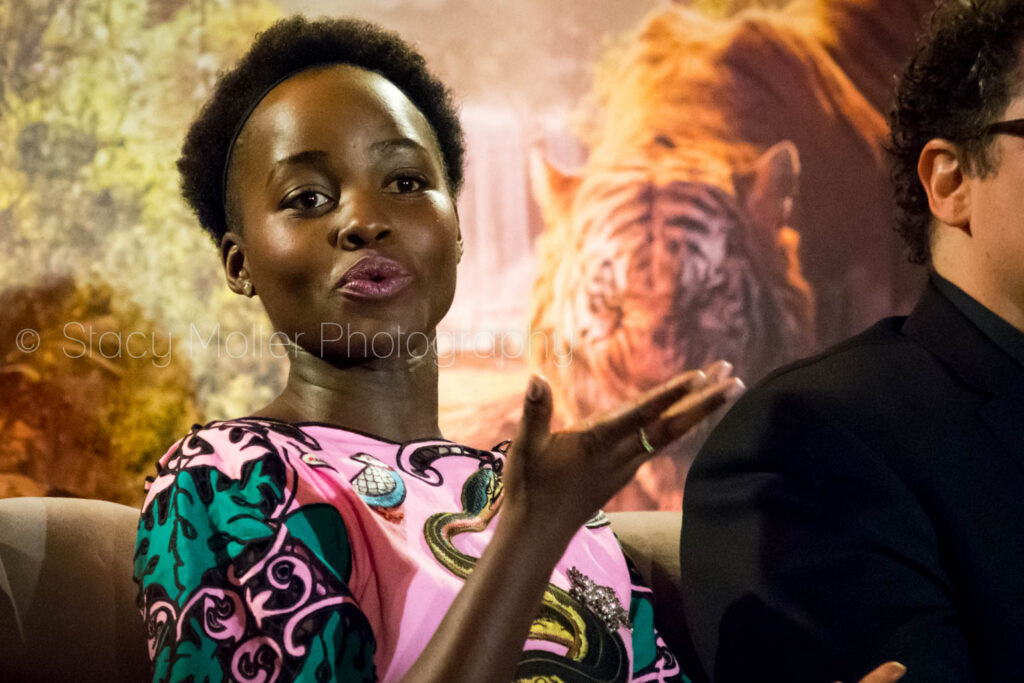 Giancarlo Esposito recognized how Jon is always so in touch with his experiences, a really wonderful trait to have he said. “When you meet someone that keen and that sharp, who not only has the memory of an experience, but the actual feeling of it too, that really excites me.” said Giancarlo. 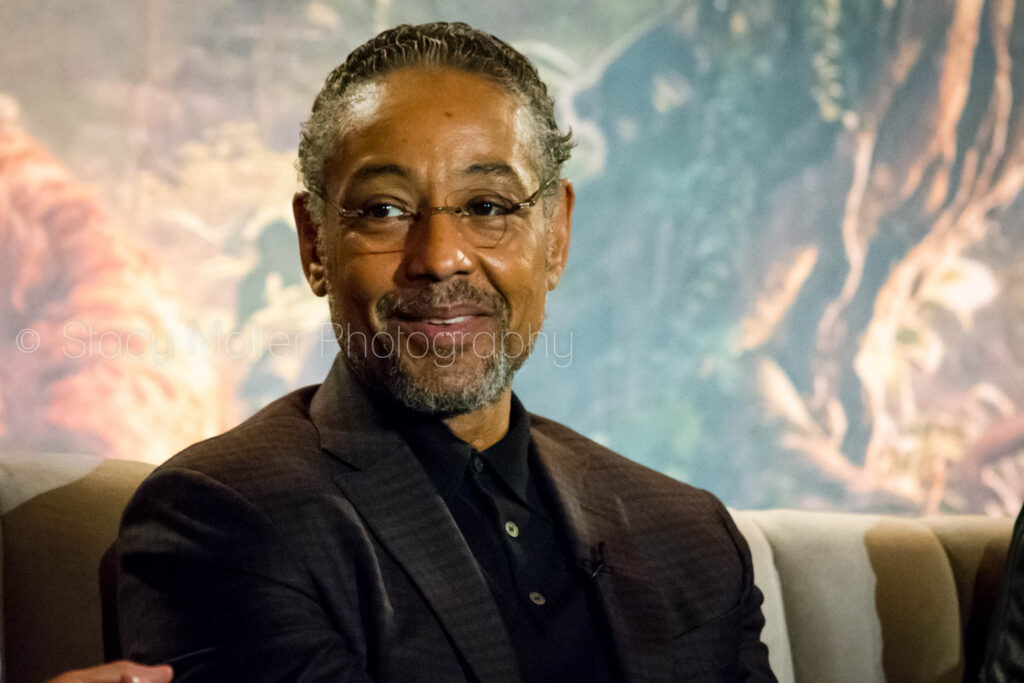 Jon on casting Mowgli – Neel is the pivot point of the film.

Jon didn't want to push too far into human emotion with Neel because he didn't want to break the reality of the animated animals. Jon knew he needed someone to anchor the film emotionally. Someone the audience could relate to and subjectively see through the eyes of. 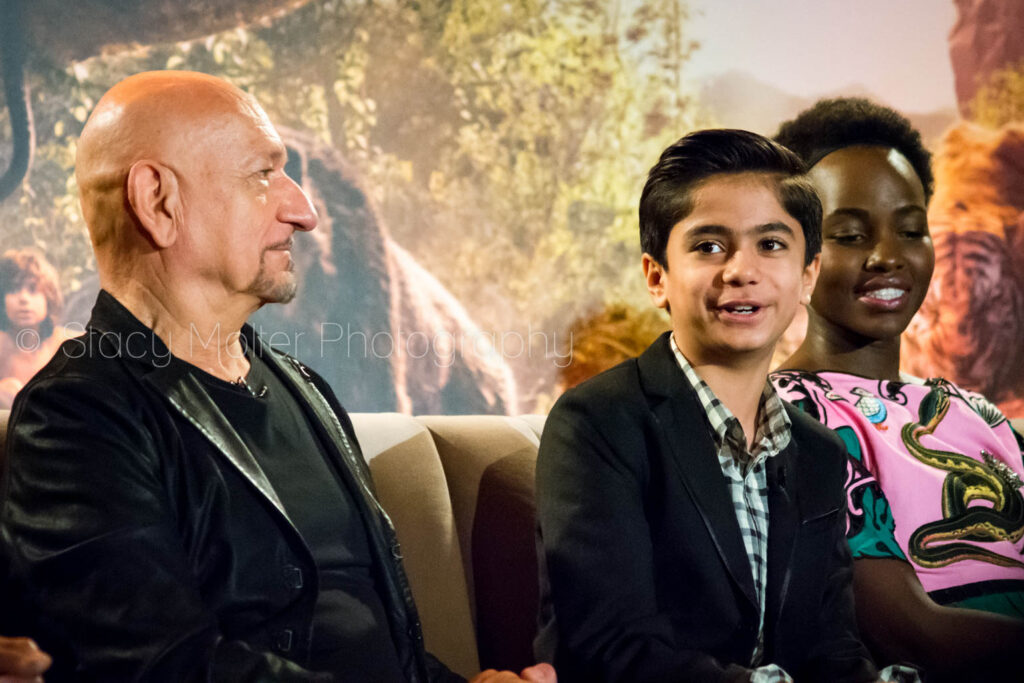 “The energy you see on-screen is Neel. When Neels's eyes would light up, he would light up the screen.” said Jon. It was a big deal what he was able to do, and as a testament to all the people, not just the people on the stage, but the crew which is really like a family. Neel was the pivot point of the film.

Sir Ben Kingsley had an intuitive feeling that he was playing Kipling, that Bagheera was the voice of Kipling in the story. 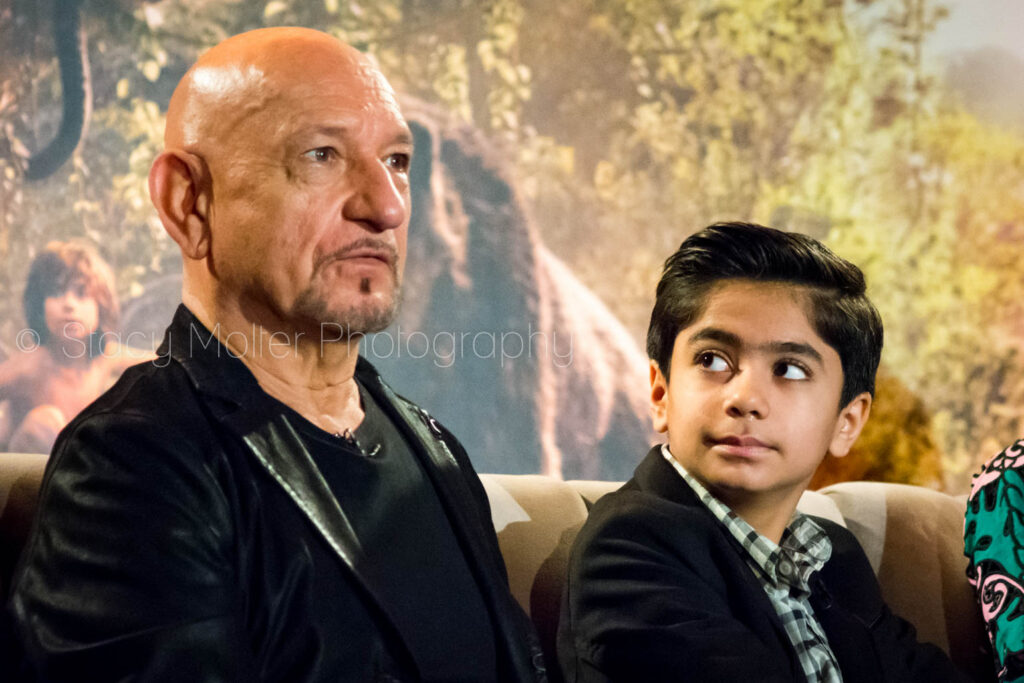 Tragically, Kipling lost his only son in battle in WWI in 1915, and after working with Jon, Sir Ben Kingsley had the opportunity to read with his son Ferdinand letters from the front-line in Begium where Kipling's son was killed. As his son and himself read this exchange in front of an audience, he realized, “My goodness, Bagheera is Kipling.”

One of Walt's most ambitious moments was bringing the audience into the middle of the music of a concert film using Fantasound. To do this, Walt equipped two theaters with speakers throughout and mic'd the orchestra with 30+ microphones to capture individual sounds. But, due to the cost of equipping the theaters this new technology was only used for one film. 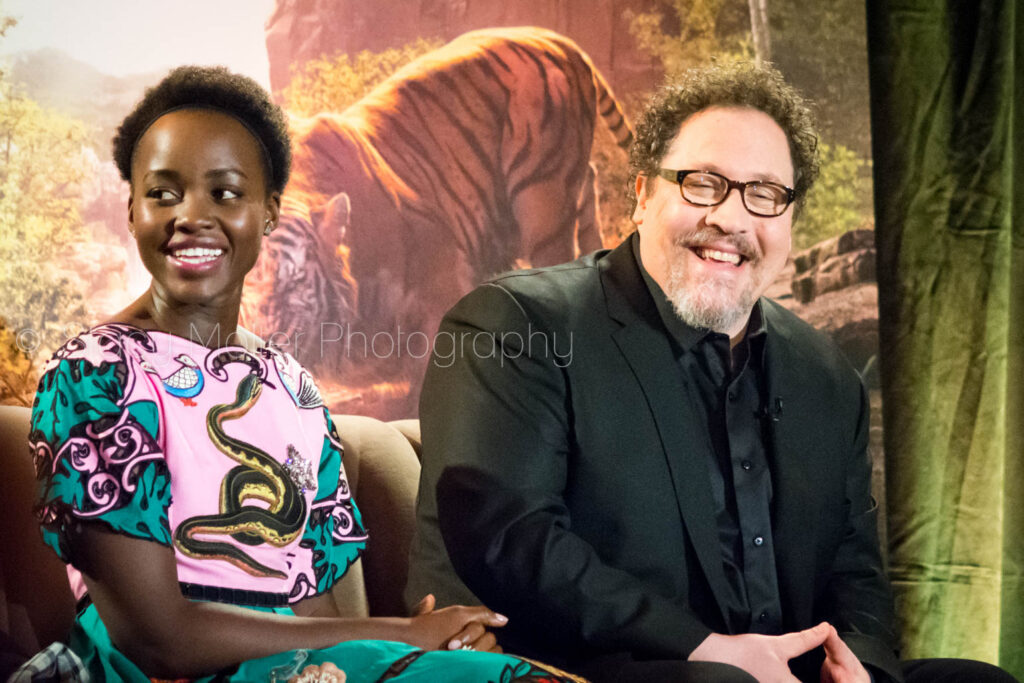 Jon's quest to evoke the emotional connection to our childhoods and channel Walt's vision into this film included dozens of opportunities to tie back into Walt's legacy, from visual cues including bits of Dumbo, Pinocchio inspired King Louie bits, and certainly shots from the animated film The Jungle Book. For Jon, that's what makes this fun.

Thanks to Walt Disney Studios, you have the opportunity watch the press conference we attended below as you get a deeper insight to the making of The Jungle Book from Director Jon Favreau, Producer Brigham Taylor, Neel Sethi, Sir Ben Kingsley, Lupita Nyong'o, and Giancarlo Esposito.

About The Jungle Book

Directed by Jon Favreau (“Iron Man”), based on Rudyard Kipling’s timeless stories and inspired by Disney’s classic animated film, “The Jungle Book” is an all-new live-action epic adventure about Mowgli (newcomer Neel Sethi), a man-cub who’s been raised by a family of wolves. But Mowgli finds he is no longer welcome in the jungle when fearsome tiger Shere Khan (voice of Idris Elba), who bears the scars of Man, promises to eliminate what he sees as a threat. Urged to abandon the only home he’s ever known, Mowgli embarks on a captivating journey of self-discovery, guided by panther-turned-stern mentor Bagheera (voice of Ben Kingsley), and the free-spirited bear Baloo (voice of Bill Murray).

Along the way, Mowgli encounters jungle creatures who don’t exactly have his best interests at heart, including Kaa (voice of Scarlett Johansson), a python whose seductive voice and gaze hypnotizes the man-cub, and the smooth-talking King Louie (voice of Christopher Walken), who tries to coerce Mowgli into giving up the secret to the elusive and deadly red flower: fire. The all-star cast also includes Lupita Nyong’o as the voice of the fiercely protective mother wolf Raksha, and Giancarlo Esposito as the voice of wolf pack’s alpha male Akela.

“The Jungle Book” seamlessly blends live-action with photorealistic CGI animals and environments, using up-to-the-minute technology and storytelling techniques to immerse audiences in an enchanting and lush world. The wild adventure swings into theaters in 3D on April 15, 2016. 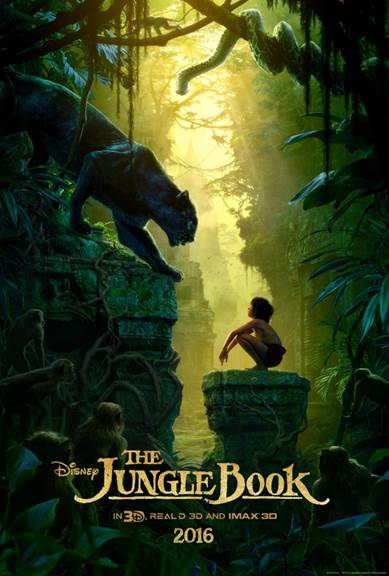