In “Sanjay’s Super Team,” the new short film from Pixar Animation Studios, accomplished artist Sanjay Patel uses his own experience to tell the story of a young, first-generation Indian-American boy whose love for western pop culture comes into conflict with his father’s traditions. 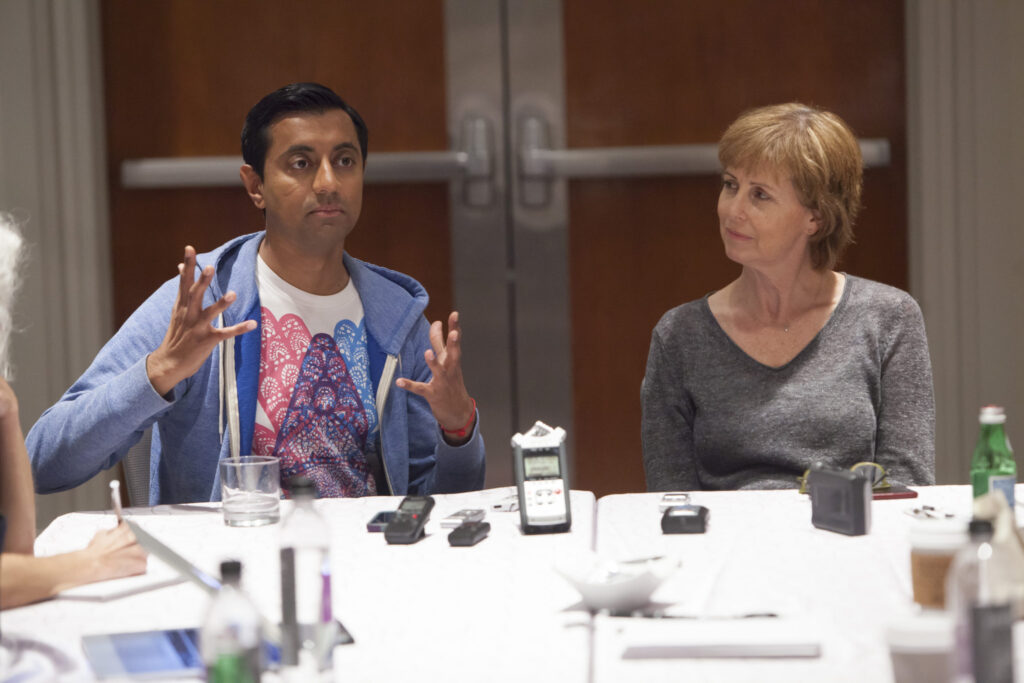 In our exclusive interview with Director Sanjay Patel and Producer Nicole Grindle, the pair share the challenges of painting this identity of a second-generation immigrant while bring together the religious and mythological influences of the movie.

Q: Can you talk about having the idea and then taking it and making the pitch, and how it evolved from the light bulb over your head into what we saw in the theater?

Nicole Grindle: Sanjay has written a number of books. He's been at Pixar for 20 years, doing traditional Pixar animation, art, but over the years, he developed an interest in pursuing South Asian art and learning more about his culture. That led to him writing these books, and that led to there being several shows of his work at the Asian Art Museum.

Eventually some folks at Pixar sort of figured he was doing all of this cool stuff, and they said, “Oh. Let's bring your artwork in-house. Let's do a show at Pixar.” We do that every now and then. John Lasseter saw this show, this beautiful artwork, and said, “Sanjay, you have to make a short film.” That's not usually how short films are chosen at Pixar. People don't usually get invited.

Sanjay was invited to do this and he said, “No,” at first. He didn't want to do it. It wasn't what he had set out to do. Eventually he was persuaded to do it.

Q:  Can you share some of the religious and mythological influences of the film?

Sanjay Patel:  Now I know what that name means. Took me a long time. I can gush about that name, just because the second book, I spent oh, maybe like, two years of my life just being obsessed about. It was based on this amazing mythology called Ramayana.

In Ramayana, the principle character's name is Rama. I have so many relatives with that name, it's evoked so often in Vedic-Hindu culture, and in my community in particular, and I had no idea what it meant. Almost like 35 years later, I read the story and it really did change my life, especially in terms of understanding where my parents were coming from.

For instance, Rama, my parents, whenever we sneeze in the house, my parents wouldn't say “gesundheit” or “god bless you,” they'd say, “Siht haram.” I don't know what that means. Once I'd read the mythology is when I understood that there was a Sihta and a Rama.

Sihta is the princess and Rama is the warrior, and they are both obviously very deified. Great name.

Q: You talked a little bit about your religious and mythological influences on the movie. I'd like to know the pop culture side of the influences as well.

Sanjay Patel: The first place that we were looking was Superfriends. This kind of sort of ensemble superhero show from the eighties. It's pretty low-budget. Once John Lasseter stepped in, he gave us this great feedback.

He said, “If you want to sort of reach audiences of today, you want to reach children today. You want to make that cartoon cool.” Once he said that, Chris Sasaki, the production designer, and I were both obsessed with this sort of late-nineties cartoons. Samurai Jack was a huge influence. 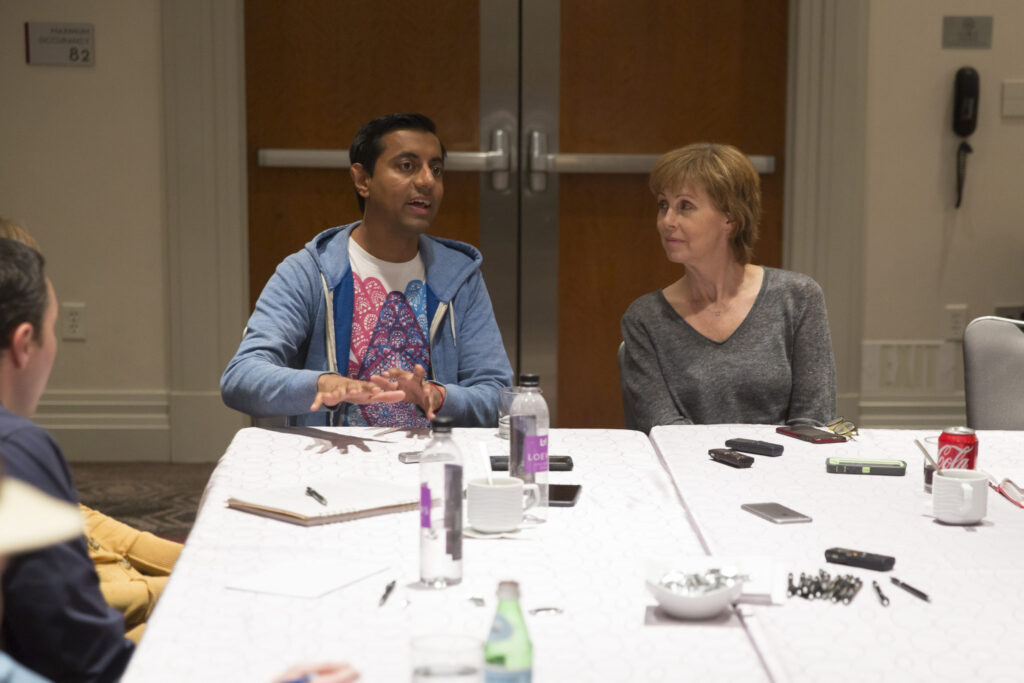 Q: In terms of the home environment, it's very sparse, almost empty. Talk about what brought you to that versus the natural impulse you might otherwise have.

Nicole Grindle: That was a very deliberate choice. I think the art direction was beige on beige, and the idea is a classic kind of basic immigrants' space. They don't have a lot of stuff.

Sanjay Patel: This is an immigrant that left all of that ethno-stuff back in the home country. They have nothing here in some part of Southern California. That choice was really, really important to me and the artist that we were explaining this, and they got it instantly. Especially the immigrants. They were like, “Oh, I had apartment like that, we got it.”

Story-wise, there's other reasons why we did this. For instance, it's incredibly important that it's kind of like this room. There is just no sensory in here. It really creates a vacuum. Imagine if there's a big-screen TV in here, playing awesome cartoons. Of course this kid's gonna escape into that world, because his home is just this beige-on-beige box, without detail, without color, without any kind of interest. We save all of that for when he wakes up in his daydream, that's the payoff. That's also the truth of most immigrants. The truth of my parents' experience as well.

The room is also divided into this east and west. You think the father's on the east side. If you look at the details on the side, there's a calendar, the shrine is a box with incense, and on the boys' side there's a map of the United States and there's the TV. He has his box and a lot of it was all squares, and then you get to the temple and it's a circle. Things have a completely different motif.

The whole shape-language that this thing was based on, the mandala's sort of principle is a square in a circle. So it's only when the two things unite at the very end, we find this sort of harmony.

Q: Why is representation important to you, painting this identity of a second-generation immigrant?

Sanjay Patel: I grew up in the eighties. I pretty much grew up most of my life here. I think there's a larger reason why I said no to this short. In this subtle way, when you don't see any reflection of you, or your community, or your parents on TV, or in pop culture, other than a show, you just kind of figure out a way to exclude yourself. You figure out a way to not be included. You figure out a way or you're suddenly told that you're not important. You don't matter.

It's awesome that Aziz has his show. I've seen tons of good momentum in that direction and I get so inspired by that. This is the number one reason I wanted to make this short. I have nieces and nephews, and they were never going to get stuff that had any reflection that looked like their families. So the second I had this opportunity, that was the purpose for me. 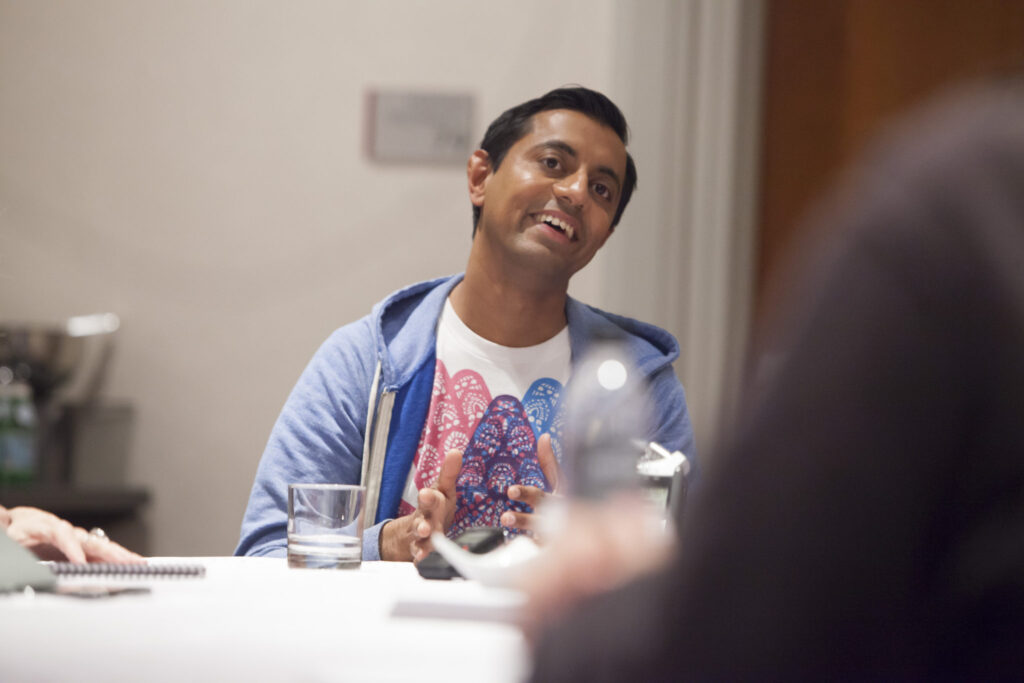 Sanjay is absorbed in the world of cartoons and comics, while his father tries to draw him into the traditions of his Hindu practice. Tedium and reluctance quickly turn into an awe-inspiring adventure as the boy embarks on a journey he never imagined, returning with a new perspective that they can both embrace.

About “The Good Dinosaur”

Portions of this material have been provided by Walt Disney Studios. Photos by Patrick Wymore for Disney•Pixar.