When a comedic cast comes together with the perfection the cast of Keeping Up with the Joneses does, you can feel the magic on and off screen. Not only does the cast shine in the film but, as we saw at the recent Keeping Up With The Joneses Press Conference, their admiration for each other radiates from every word they say. 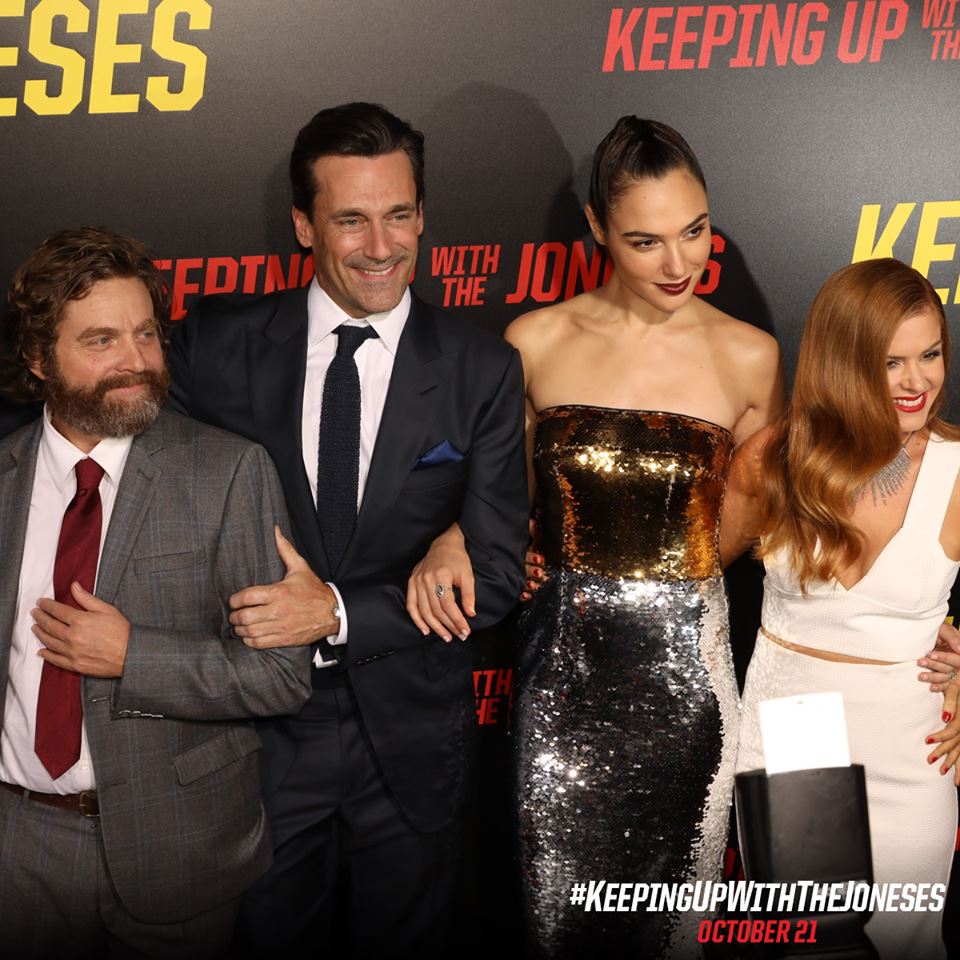 See also: Training to Be a Spy For Keeping Up With the Joneses

Check out the latest trailer from Keeping Up with the Joneses, and get an exclusive behind the scenes look from the cast of 20th Century Fox's latest comedic film below.

Keeping Up with the Joneses opens in theaters this Friday, October 21st.

Keeping Up With The Joneses Press Conference and Red Carpet Premiere

About the film: An ordinary suburban couple (Zach Galifianakis, Isla Fisher) finds it’s not easy keeping up with the Joneses (Jon Hamm, Gal Gadot) – their impossibly gorgeous and ultra-sophisticated new neighbors – especially when they discover that Mr. and Mrs. “Jones” are covert operatives.

Q:  Can each of you talk about becoming part of this project?  What was the attraction to you?  And, Jon, particularly did you always want to play a spy?

Jon Hamm:  I don't think I always wanted to play a spy.  I think there's a special place in any boy's heart of growing up with James Bond and that whole thing that makes it cool, and I think what we found in this is there's something kind of naturally funny in the way, in taking these kind of prototypes of masculinity or cool things that we see and then putting them in situations where things don't go perfectly as scripted.

Matt Walsh:  I think for me the script. I auditioned, but the script was really solid and really funny and obviously interesting interplay between the world of espionage and sort suburban ennui or desperation.  Then the character was really fun because the way we play out in the story is a surprise, which is really fun to play.

Maribeth Monroe:  Yes, same with me.  I read the script, and I auditioned for Greg, and obviously once I heard who was cast, I was like, oh, my gosh.  This is really awesome, you know?

Q:  I always imagine that doing action scenes must be a huge blast.  So, do you have any favorite sequences to shoot, aside from the aforementioned skydiving?

Zach Galifianakis: Working with Isla, I only laugh because she's really fun to make fun of in real life, and she allows you to do that.  The fact that she's like that, I instantly like her.  There’s an openness to her for that which is fun.  She laughs at herself a lot, which is really important for an actress.

Isla and I really clicked.  She had newly given birth.  So, that was super impressive.  You know, you don't think about it, but, yes, there are babies around.  To watch Isla do both of those things is really, really impressive, and never complained or any of that stuff.

Q: And ladies, can each of you talk about your lead men in this?

Isla Fisher:  When you work with someone like Zach Galifianakis and you're a comedy nerd like me, I'm a fan of great comedy.  I've watched all his stuff.  I've seen his standup.  I love Between Two Ferns.  So, all I'm thinking the whole time when I'm a comic actor, but I'm not a standup, so I'm just thinking the whole time please say something funny.  Say something in the funny to make Zach laugh.  If you can make Zach laugh, you'll really feel good about yourself.

Gal Gadot:  Jon thought I was the PA when we first met.  This is how it all began, really good, right?  We had a table read, and I saw him the first time downstairs.  Usually the director or one of the producers would have introduced us.  But, I saw him, so I just went to introduce myself.  And then he was like very polite.  And he just got off a flight.  And he's like can I please have some black coffee.

I said, sure, but you know I'm playing your wife.  I'm Gal.  I'm playing Natalie.  And then he felt embarrassed, and he was super sweet about that.

Q: Obviously as actors, you guys get to play a lot of lives, different characters.  In keeping with the idea of secret identities, if you could have an alternative persona in maybe an alternate dimension, alternate universe, what would you imagine your's to be?

Matt Walsh:  I would be really fit and handsome.  I have two thoughts.  We all read detectives.  I think you need to be a detective of some kind.  It's just fun to think you're solving a mystery ever since you were a kid.  Then I also have a background in psychology, and I was going to be a psychologist at some point in my life.

So, that would be the other life I could have chosen, which is like dealing with people's problems and listening and trying to help them.

Maribeth Monroe:  I don't think I ever thought of this occupation before I did Keeping Up with the Joneses.  But, I think it'd be pretty killer to be a travel writer, like a really successful one, like Jon Hamm's character.

Q:  Isla and Gal, you both have done other roles and other projects that have involved different levels of physicality.  So, does any of that past training for either of you, did it translate into the action comedy of this one, like doing the car chases or the gun fights or any of that?

Isla Fisher:  For me, yes, I trained as a clown. Training as a clown and finding a body onstage and not just relying on facial expressions always helps when you're doing physical comedy of any form or slapstick.  So, there is a bit of that.  I got to fall off the back of a sofa.  I get to run a certain way in heels.  I get to do a silly walk.  I mean all that stuff definitely is informed by my training.  What about you?

Gal Gadot:  I just talked to the choreography that they taught us.  I had a lot of stuff that I had to do in the car.  So, it was going only one way and listening to what they told me to do because otherwise my head would be chopped off.

And when we were in the hotel and we had the entire gunshots, the craziness that went there, you can take any risks.

Q: The parents are under a lot of pressure with all the kids.  Do you ever feel that kind of pressure being a parent, making everything awesome for them, providing for them, going to any lengths to get them what they need?

Matt Walsh:  Yes. In LA, everything's appointment. In our time, you would just come home from school, throw your backpack down, and then run around the neighborhood till six o'clock, and then your mom would call you in.  In LA, it's dance class.  You have to take them to dance class, or a playdate is a calendar event.  If they're interested in music, which you want to give the gift of music to your child, you got to set up the piano teacher and decide whether they're coming to the home.

The overwhelming aspect of organizing kids' schedules to feel like you're letting them evolve into their full potential is very stressful as a parent, yes, and I can definitely relate to that.