As we continue our coverage of the global media day and the Star Wars: The Force Awakens press conference, we couldn't wait to sit with the remaining cast at the event because let's face it, if they hadn't split the cast up all the Star Wars greatness in one room would have for sure made our geeky little heads explode! 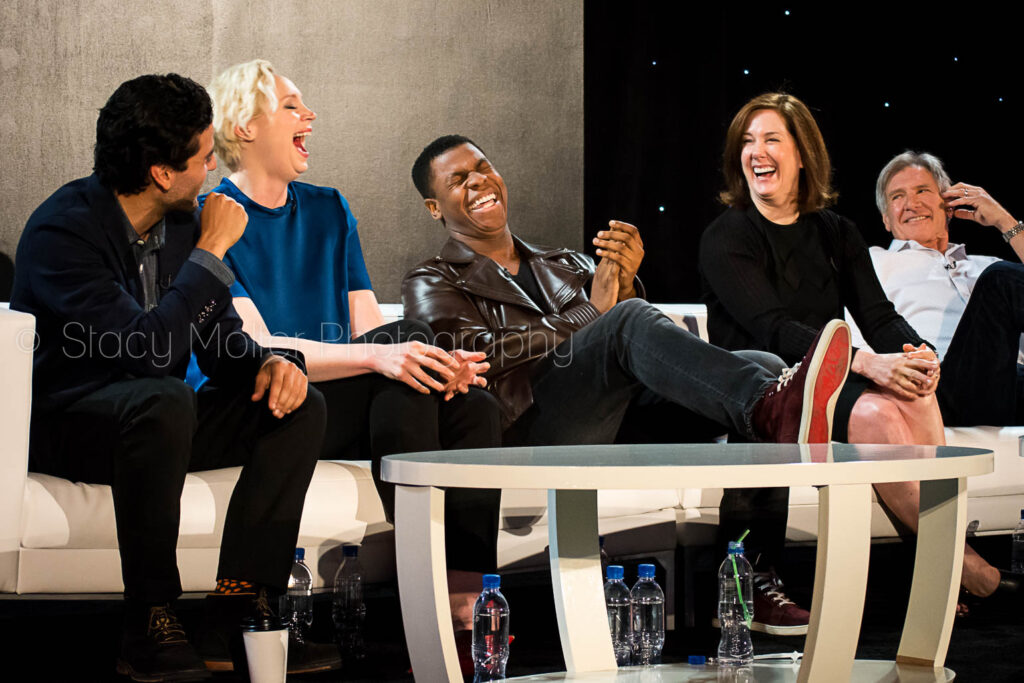 Not only did we learn so much more about Star Wars: The Force Awakens as we sat with Harrison Ford (“Han Solo”), John Boyega (“Finn”), Oscar Isaac (“Poe Dameron”), Gwendoline Christie (“Captain Phasma”), Kathleen Kennedy (Producer), we were graced with the poise and humbleness of Harrison Ford as we listened to him share a touching moment about his feelings on being back on the set of Star Wars.

It feels familiar. It feels good. It’s good to be home, as Hans says in the trailer. I’m aware of the value that’s placed on these films by the audience, and I’m gratified that they’ve been passed on. The first three have been passed on generationally through family, and that there’s still an audience for those of us that were in the original film. 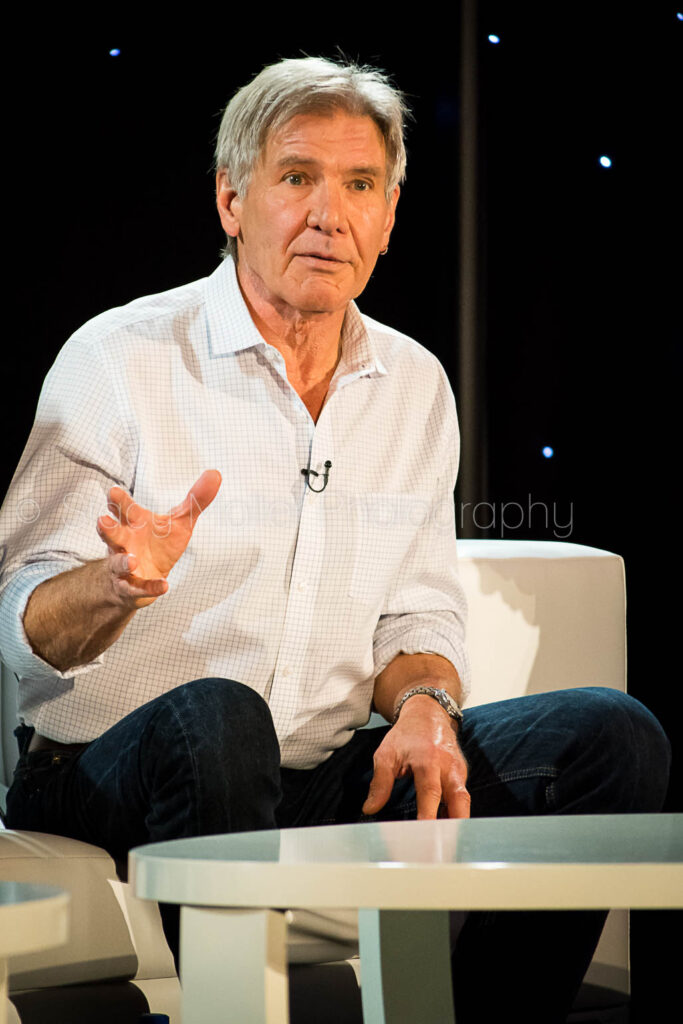 The secret is out about why this film is so secret.

Kathleen, why the unprecedented level of secrecy around this film? I’ve never covered a film junket where the media couldn’t see the film in advance; the cast seems terrified of letting anything slip. Some of them say they haven’t even seen the film. So why did you go to those extremes?

Kathleen Kennedy: Right from the beginning we’ve respected the fans, and the fans have really been the ones focused around making sure that everybody and anybody who walks into this movie gets to be surprised. We have so little things that surprise us anymore when you walk in to see a movie – it’s all told in the trailers; it ends up online way in advance. I think that’s something that overwhelmingly, I’ve even had people say to me, “I don’t want to read anything, at all,” so that they can get into the theater and actually have a pleasant surprise. So that’s really all that’s driving it. We’ve respected that in all the ways we can. 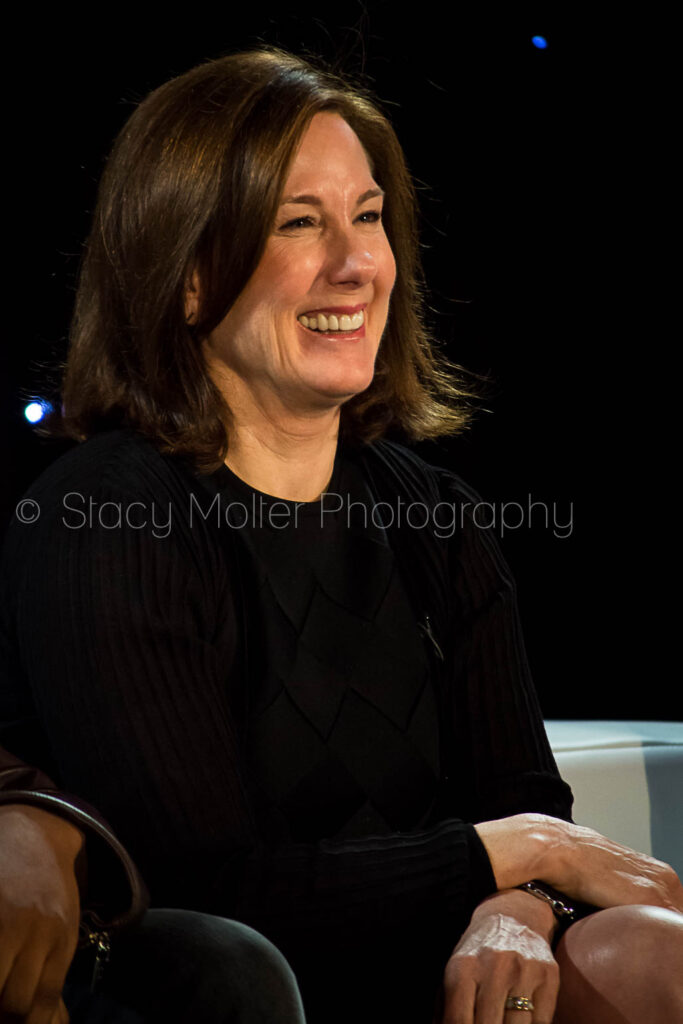 Kathleen, I know that we can’t really talk about the film, I can’t ask you what’s in the movie. Can you talk about what’s definitely not in the movie?

A new generation is on the horizon, and new toys! Toys are fun!

Harrison Ford, could you just talk about what it means to you to be one of the bridges between the original series and this new generation?

Harrison Ford: It’s gratifying to be asked to be part of this. There was an interesting story to tell through the character. It’s always nice to anticipate working in something that you know people will have an appetite for. This is not a crap shoot. This is a big casino, and it’s fun to play with these toys again. It’s been a great experience. 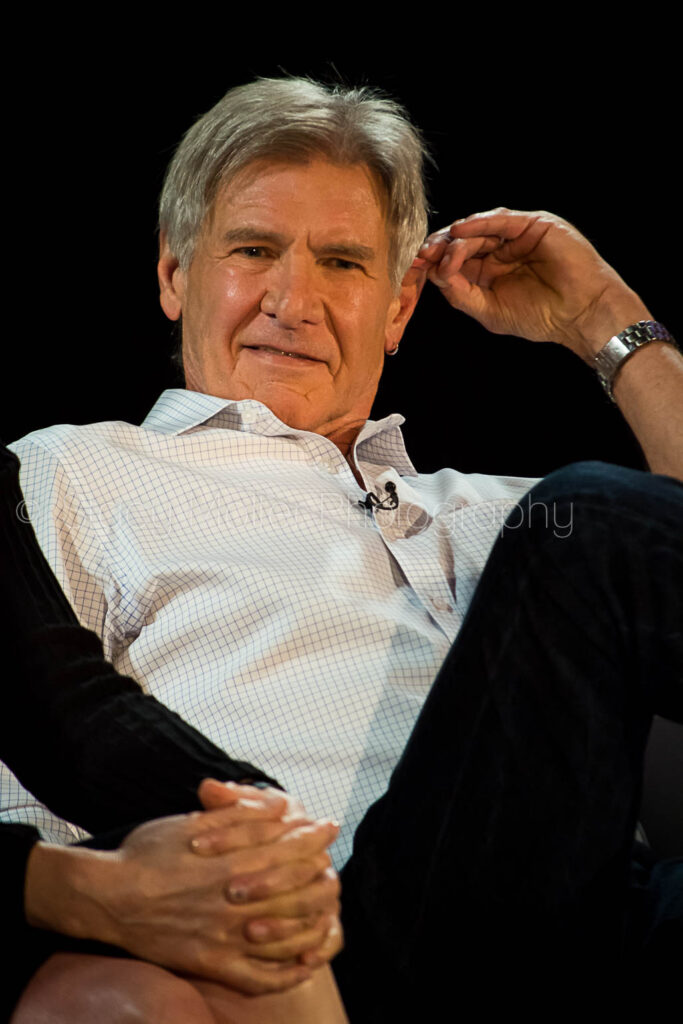 Gwendoline, were you prepared for how Captain Phasma became kind of an instant sensation among fans? As a second part to that, do you think that positioned you possibly for a really strong run at the Captain Marvel role, if Marvel happens to offer it?

Gwendoline Christie: I was very surprised and heartened at the overwhelming response to the character of Captain Phasma. But I really felt that what Kathleen, and JJ, and everyone had created at Star Wars was – I think JJ’s been open about the fact that he wanted to respect the origins of the films and celebrate them, but to bring them into the modern-day.

Confirmation of that seemed to be, to me, in this amazing character of Captain Phasma, who is Star Wars’ first on-screen female villain. More than that, this is a character who, so far, we have related to due to her choices, due to her character, and not due to the way she has been made in flesh. Conventionally, that is how we have related to female characters. So this to me felt very progressive.

The response from the audience and the fans has been so celebratory, it makes me think that this is the kind of thing people want to see. People want to see a more diverse reflection of society. I feel incredibly privileged to play that part. If anyone else wants to offer me any work, then I am very grateful and willing to listen. 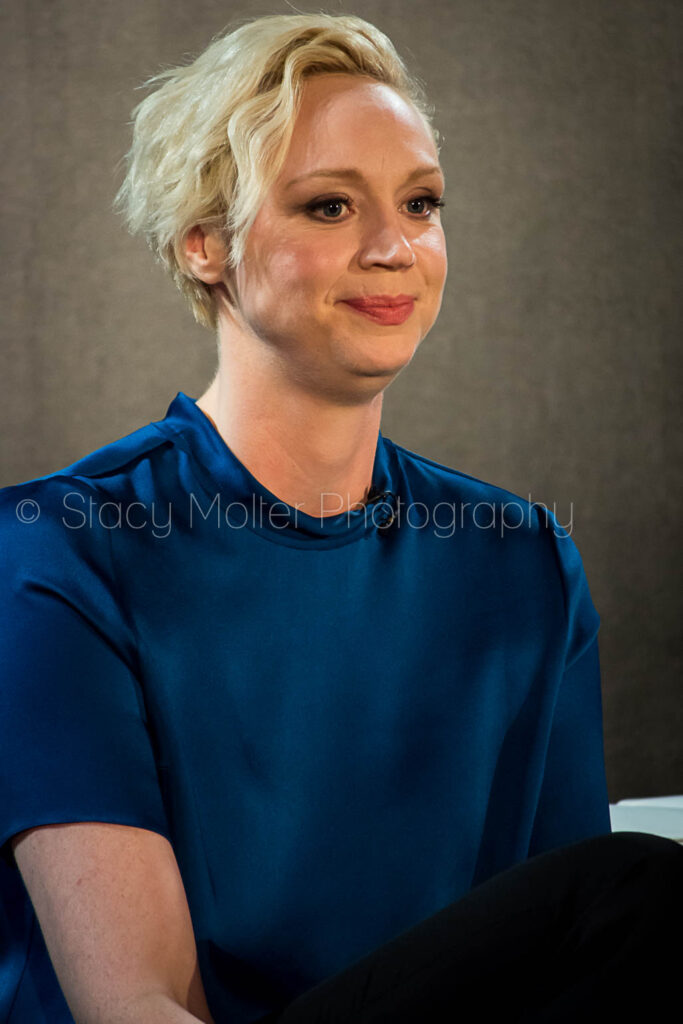 The birth of Poe Dameron, Finn, and Captain Phasma.

For the three newcomers, I was curious how much of your characters’ back stories you were told ahead of time, especially while you were developing the characters, and how that informed where you came in with it?

Oscar Isaac: I think this has been one of the coolest things about working on this with JJ and with Lucas Film. There’s been a real sense of collaboration with that kind of thing. It was almost a bit of a sandbox element of it. We could talk about those things and there was an evolution of the characters even from the first meeting with JJ, Kathy, and Larry, to what ended up on screen.

For example with me, after we had started filming I was talking a bit about where Poe could have been from. In New Hope, at the very end of New Hope at the Medals Ceremony, one of Guatemala’s claim to fame is that last shot where the ships are leaving, where you see the temples, that was shot in Guatemala. For me, the fact that I was born there, and that’s a rebel base, and I’m playing a rebel – a resistance fighter, a rebel fighter, I thought, “You know, maybe Poe was there. That’s where he’s from.” 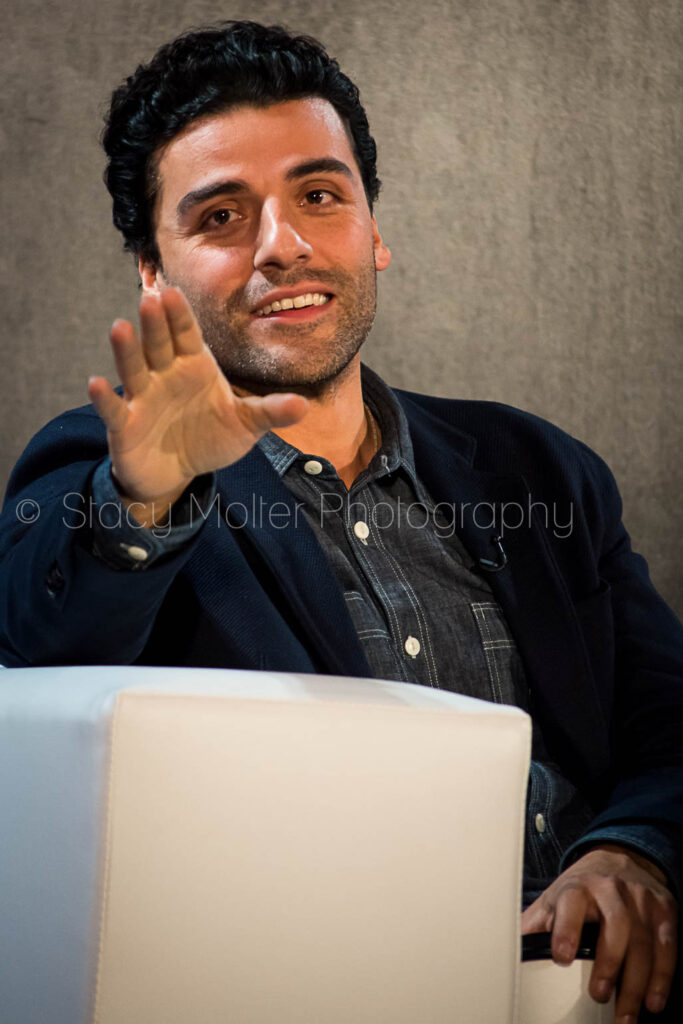 John Boyega: I didn’t know much going in. I do remember having the sides which were loosely based on who Finn and Rey were. I remember during my time screen testing, I was like to Daisy, “There’s no way that our stories are so simple.” We still don’t know. So I’ve still got some conspiracy theories, as a fan, as to where Finn comes from, and I’m still trying to figure that out. But I like that it’s a mystery. I like that. 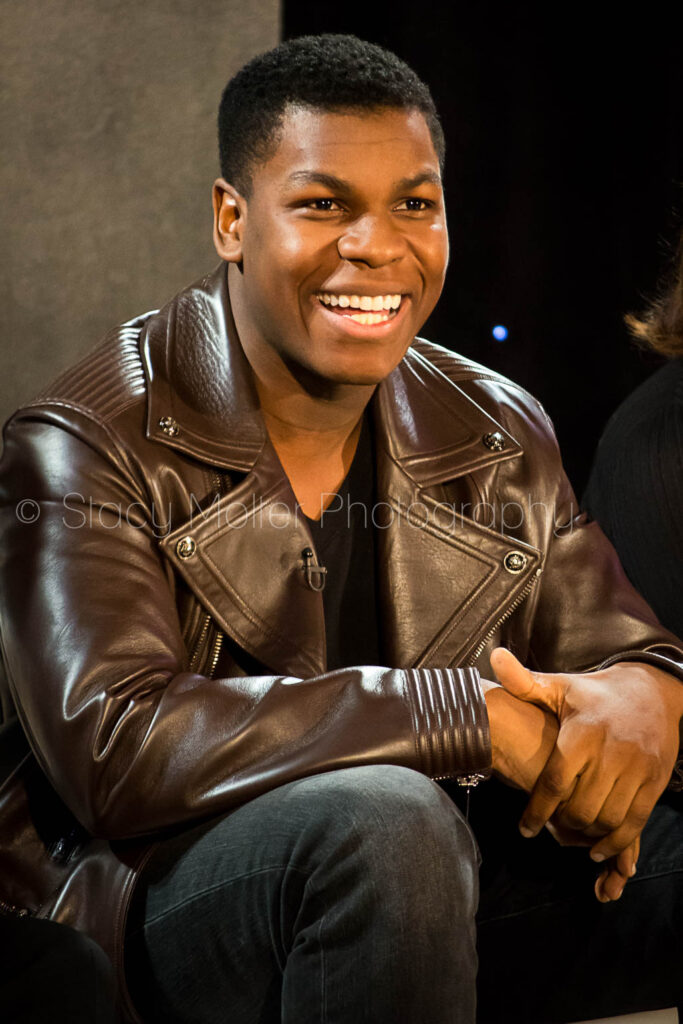 Gwendoline Chistie: Yeah, mine was similar. I was so heartened that it was a genuine, creative experience to work with JJ about who the character was, and to develop that together. And really, without horribly ruining everything for everyone, I think it could be – it’s interesting to see where my character may go.

What is your favorite rumor that you’ve heard – that you go, “Oh, my God, people are really saying this? People really think this is going on?”

Oscar Isaac: That Jar Jar is Kylo Ren. That’s my favorite. I kind of wish that was true.

John Boyega: I remember reading the theory that Finn is Mace Windu’s grandson, or something like that. I was at a party and someone behind me tapped me on the shoulder and was like, “Yo, Black Jedi.” I turned around; it was Samuel Jackson. He’s like, “You’re my son.” Yeah. I’d say that was the moment that was incredible for me.

Gwendoline Christie: It’s absolutely impossible to follow what John has just said. I’ve not followed any fan theories at all. I’m just going to say, because I’ve been busy with Game of Thrones.

About Star Wars: The Force Awakens

Lucasfilm and visionary director JJ Abrams join forces to take you back again to a galaxy far, far away as Star Wars returns to the big screen with Star Wars: The Force Awakens.

Portions of this material have been provided be Walt Disney Studios.