We grabbed our beach towels and dusted the sand off our feet for an exciting Teen Beach 2 interview with Chrissie Fit (‘Chee Chee’) and Jordan Fisher (‘Seacat’), two of the coolest cats on the beach. 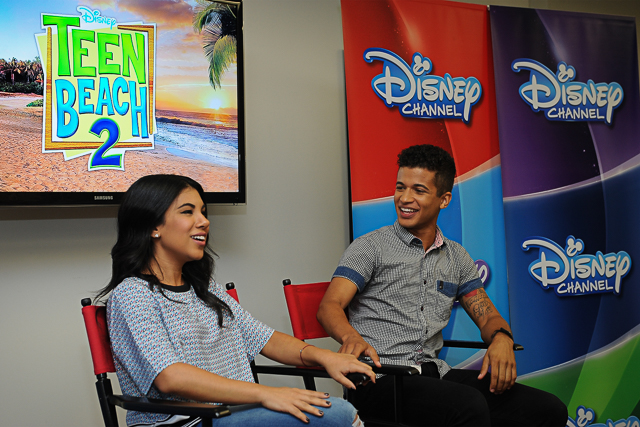 We sat with Chrissie Fit (‘Chee Chee’) and Jordan Fisher (‘Seacat’) earlier this month for a Q & A celebrating the release of Disney Channel's TV movie Teen Beach 2, where they shared who spent hours conditioning and training for the movie while the other skated in after eating crawfish in Louisiana, how childhood crushes got them where they are today, the important message echoed throughout the movie, and how in world ‘Chee Chee' kept her beehive in place throughout the intense, fast-paced dance moves. 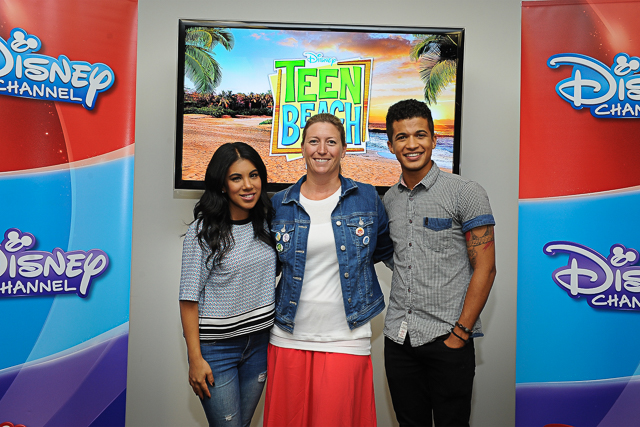 For more Teen Beach 2 fun, you have to check out our choreography lesson with Chrissie Fit (‘Chee Chee’) and Jordan Fisher (‘Seacat’) that was held immediately after this Q&A, featuring the dance moves from ‘Gotta Be Me', one of my favorite songs from the movie!

Teen Beach premieres Friday, June 26th at 8:00 PM ET/PT on Disney Channel, and will be available on DVD with a never-before-seen dance rehearsal bonus feature.

Q: I’d like to know your dance backgrounds. Did you start as singers and then get into dancing, or did you do both at once?

Chrissie Fit: I am not a professional dancer, although Teen Beach 2 makes me look like one. I am Cuban, so I grew up in a household where we were dancing Salsa, Meringue, and we're a very dance kind of loving family.

I was a singer and then I became an actress so I don’t really have a dance background. I think I learned the most doing Teen Beach Movie and I appreciate it so much.

Chrissie Fit: That’s so crazy. I guess my acting story is similar to yours because in 5th grade this Spanish teacher was doing a production, and it was a gypsy kind of dance, singing kinda’ thing, and only 6th graders could go.

So I went home and asked my neighbor who was in the show, ‘Can I see the script?' I read it and I noticed there wasn’t a bad girl in it. I said, ‘Well there has to be a bad girl.' I went the next day and I said, ‘Can I play a bad girl?'

I pitched her an idea. I don’t know if she felt like sorry for me or if she was impressed that I took this initiative, but she put me in the show.

The guy didn't fall in love with me, but I fell I love with acting.

Q: You wore a piece in your hair for the film. Was it hard to move around, and dancing, and keep it place?

Chrissie Fit: It actually was, more so than the first time when it was all my actual hair. I was doing my ‘Bubba-bubba' [Shakes head] and feeling that thing go ‘Boom-boom,' and it was kind of distracting, but it was definitely a lot better for my hair than all that teasing and stuff.

Ultimately your hair kind of stays in that shape with the piece. It would kind of go all over the place,  and I felt like it was more maintenance. If we have to get that beehive going again, I probably would do my hair again. 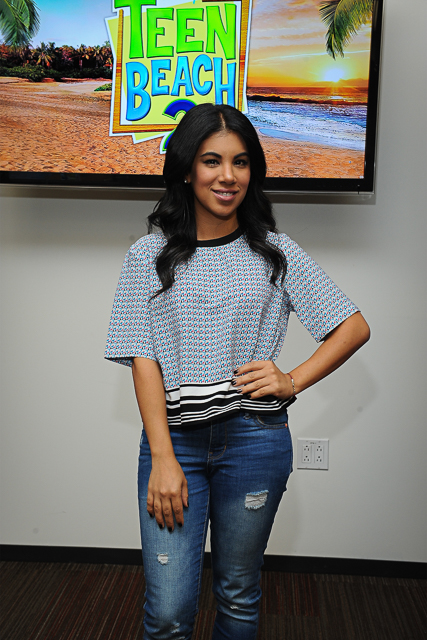 Q: What kind of advice you have for an aspiring musician, artist, or dancer?

Jordan Fisher: There are a lot of people who come out to L.A. and move to New York with the idea of becoming famous, and typically those people don’t find success in their field because their passion is driven from a very different place. It's the people that do what they do because they love it that tend to find success. People gravitate towards people that are like-minded,  so you have to understand why you're doing it first.

Secondly, it’s cliché and you're gonna' hear it at times, but I just don’t take no for an answer. One of my favorite song writers of all time is Diane Warren. If you don’t know who she is you, you absolutely should. Her discography is ridiculous. She’s written with everybody from Cher to Beyonce. She wrote ‘If I Can Turn Back Time'.

She has not had to write a song for anybody for 20 years and she’s made more money than you could ever, ever dream of, but she’s still does. She pitches. She writes songs every day. She does what she does because she loves it. She’s a pitch queen and that hustle started when she was 17.

That turned her into a multi-billion dollar, incredible song writer that you doesn’t have to work a day for the rest of her life, but she will until the day she dies. Those are the people who find success, and it’s also true in like-minded people.

Chrissie Fit: I would also say in this kind of world it’s not like sprint, it’s a marathon. Have patience, educate yourself, and not just with the craft that you want to do.

So much of my art, and the choices that I’ve made have come through the education I received. So really apply yourself, give everything you do 100%, because then it’s more likely that the thing you invest the most time in, you’ll give 110%.

Q: Can you tell me about rehearsals? How long was it and how many hours?

We conditioned for a month, and had choreography for about 3 weeks here in L.A., and then we moved to Puerto Rico to rehearse. We rehearsed there for another week or two. Honestly, most of the time spent in studio was conditioning, and the choreography happened closer to the end. 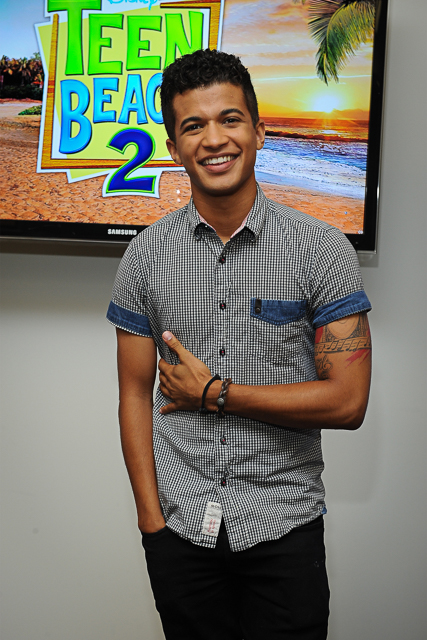 Chrissie Fit: I missed all their rehearsal and conditioning. I was not in top physical shape.

I was eating jambalaya and crawfish in Louisiana. I would get videos sent by them, of the choreography and in between takes I would have to learn the Teen Beach 2 choreography which is incredible. It’s very fast and on another level.

I commend them so much because they did so much work before hand, and I skated in and got 3 hours of practice.

Q: Were the costumes were comfortable, and if not what would you have changed?

Chrissie Fit: Yeah. They had a little bit more comfort I feel. We had to wear the leather and all that stuff. I was very comfortable, but it is hot. It’s Puerto Rico. It’s hot. So being in leather in not ideal, but it never felt uncomfortable.

Jordan Fisher: The beautiful thing about our wardrobe team, and honestly about all of the creative aspects, doing it a second time around we all pretty much knew what needed to be changed in terms of what we needed as actors and as dancers in the film.

Chrissie Fit: When we did the reprise of ‘Falling for You,' we got to see the popular songs from Teen Beach Movie in a different way. I initially had to dance in that outfit that had the corset, and I said ‘I don’t know if I feel comfortable dancing with this?'

I said, ‘Alright let’s figure something out.' We got a new outfit where I felt really comfortable and I could have this guy push me off the stage and fall down. They were very open to working with us and what made us feel comfortable and safe.

Q: Just going off that, was there any time a choreography thing that wasn’t working? Were you guys able to change that, or you just happened to get it down?

Jordan Fisher: There definitely was. There were some harder moments on the beach where it was crowded and safety was a concern. You know rehearsals were on a hardwood floor, then we switched over to the beach where there's not a ton of rehearsal time. We didn't have mirrors on the Governor’s beach. We tried to suggest that, but it didn't really work out. Everybody had a voice in the film.

All of the dancers are incredible. Everybody’s toured with different artists. Everybody has an incredible amount of experience, which is really great, but even as the actors we could say, ‘I feel this is a little awkward. Is there any way we can shift something this way?'

People would be like, ‘Oh that actually is a little bit easier. Let’s do it that way. Good stuff. Good, good, good suggestion.' The product turned out really well, which is that’s what everybody was concerned about.

Chrissie Fit: It was a very open set and everybody was very open to our input. We wanted to make the best movie possible, and Christopher Scott who was the Choreographer did a brilliant job of stepping up the choreography in the second movie. I’m really proud of this movie.

Not just because of the spectacle. Yes it’s bigger, it’s better. Aside from the dancing, and the costumes now, there’s many wonderful messages in this movie.

I’m big about female empowerment and here we’re seeing these two girls, Mac and Lela, have an actual friendship and not compete against each other for something. I feel that’s really important for our young girls to see, that there are healthy friendships and relationships.

Even with Ross and Garrett with their characters. Their friendship is so important in this movie. They both help each other figure out things that they might have felt insecure about, which is also a thing for kids. So aside from all the great musical numbers, and the dancing, and all that stuff, I feel that this is a great movie for kids because it just shows how important friendship is, and it shows healthy and positive friendships with girl, and with females. 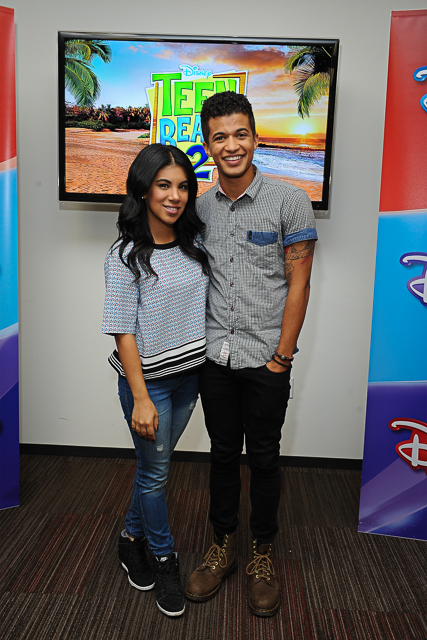 Teen Beach premieres Friday, June 26th at 8:00 PM ET/PT on Disney Channel, and will be available on DVD with a never-before-seen dance rehearsal bonus feature.

Portions of the material and expenses for this event have been provided courtesy of Walt Disney Studios. Additional photographs provided by Disney XD/Valerie Macon.

« Inside Out Hollywood Premiere Event
Disney Pixar Inside Out Press Conference »