You are here: Home / Entertainment / The Cast of Tully Gives a Brutally Honest Look at Motherhood

There's no question that motherhood is hard. Like, really, really tough. But what makes it even harder is that as moms we're supposed to put up this facade that everything is always perfect in our lives, a sort of bubblegum pop lifestyle of perfectly baked cupcakes, unicorns, and rainbows, and having our shit together on a daily basis, even when we don't. We're raised with the unspoken rules that if we show our struggles and our challenges, just how imperfect life truly is, that in society's eyes we are somehow failures as a mom. These higher standards moms are held to is exactly why I love Focus Features latest film, Tully. In Tully, we get a brutally honest look at motherhood through the eyes of Marlo, a struggling mom of three who is just trying to make it through each day. 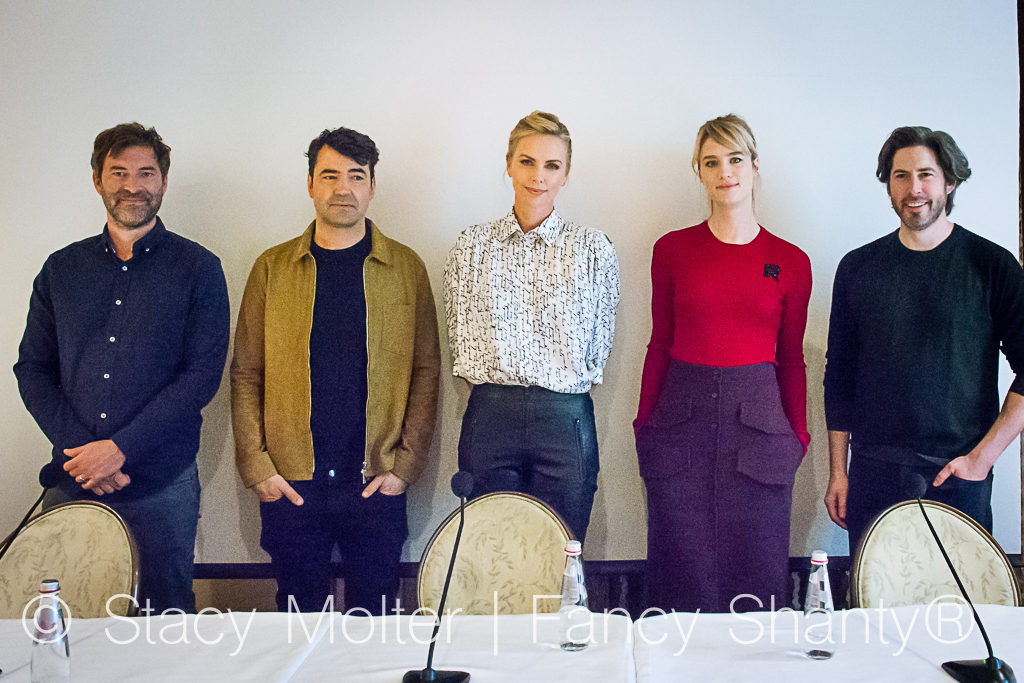 Tully – A Must-See for Women

Charlize Theron is fantastic in the powerful, dramatic comedy, Tully, set to top box office ratings this weekend with an already amazing 94% rating on Rotten Tomatoes. Her fierce and vanity-free performance paired with Diablo Cody's witty script makes this film a must-see for women, who will find comfort in the realization that they are not alone. 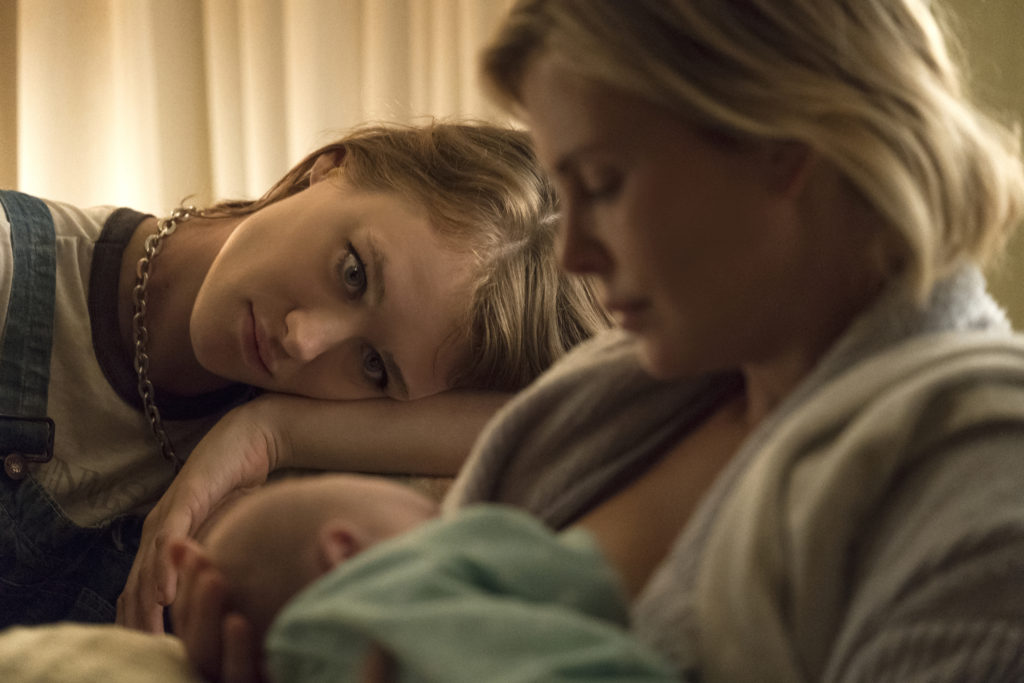 Marlo is undeniably relatable to moms. Emotionally and physically exhausted, still carrying the baby weight gained with her infant daughter Mia, a picture you rarely see in movies these days, we empathetically watch as life is slowly being drained out of Marlo. Her husband, Drew, is a nice guy but he is also clueless as to how the constant waking, feeding, diaper changing is embattling his wife with exhaustion.

This is where we meet Tully, a young 26-year-old night nanny hired by Marlo's brother. Vibrant and generous, Tully goes beyond her job of looking after the baby at night, cleaning up the house and more importantly, helping Marlo heal emotionally from the physical pains of exhaustion.

But, just as Tully convinces Marlo to take a night off, the film takes some unexpected detours and hits some brutal truths about motherhood as we see one of Marlo's darkest days.

Tully opens in theaters this Friday, May 4th.

The Cast of Tully Gives a Brutally Honest Look at Motherhood

We had the opportunity to sit with the team of Tully, Jason Reitman, Mackenzie Davis, Charlize Theron, Ron Livingston, and Mark Duplass, in Beverly Hills recently to learn more about the joys and rigors of motherhood within the film and walking the sometimes fine line between humor and scary truth of motherhood.

Q: This film is so successful in walking the tightrope between humor and content that is very serious and sometimes devastating. So I’d really like to hear from all of you on how you walk that balance, to make the tone work so well.

Jason Reitman: It starts with Diablo, and that’s how Diablo’s always written. She’s found things that could easily be considered tragic or dramatic. I mean, I even remember when I was making Juno and I would tell people, I’m making a movie about teen pregnancy and they would go — ohhh. I’d say, no-no-no. It’s a comedy. It’s going to be funny. Really? And they’d be confused. With each subsequent film, I think people start to understand this is going to be a funny film, despite what we’re talking about. I think that’s the thrill of reading her material, is that it’s right there on the page. The drama and the humor are intertwined. 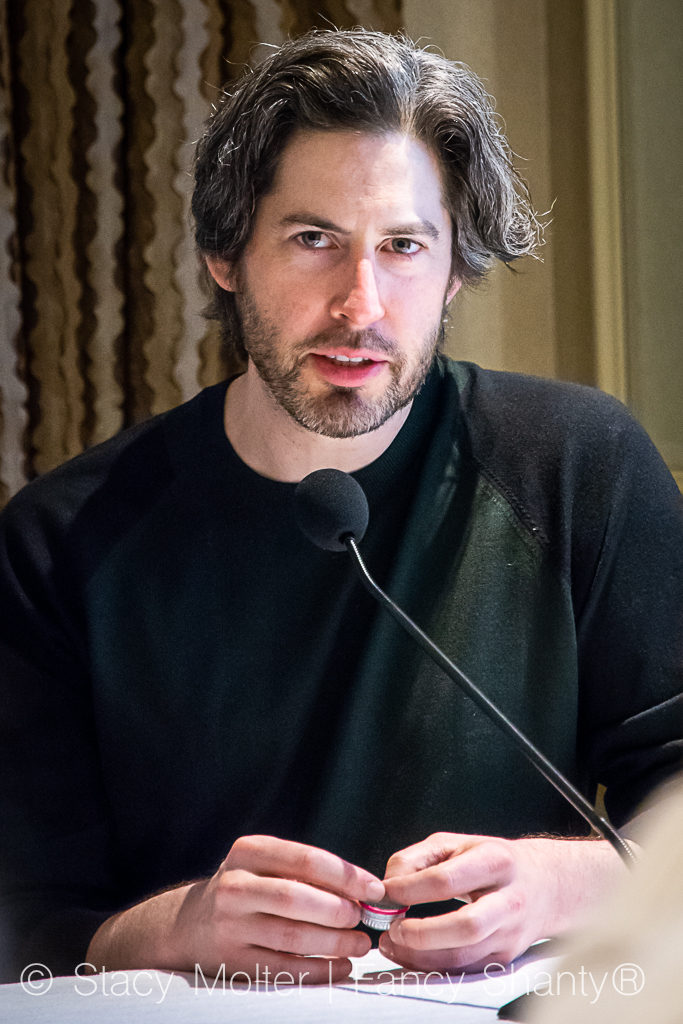 Q: In writing the script, what came about creating a quirky child? I appreciated that and it’s great to know that you’re addressing that because other moms don’t see what you’re going through — and they’re like, why can’t you pull it together?

Jason Reitman: There’s something really clever about how Diablo did that in this screenplay. You don’t really hear what was going on with her son, you also never hear the term “postpartum depression” in the film, and these are all complicated gray areas and I think it’s really smart that Diablo never made it specific — because really, what either of those are there to serve to is this idea that we’re only supposed to present half of what it’s like to be a parent to the world.

It’s like what Charlize says, at the beginning when the principal says, oh, you’re about to pop and Charlize goes, Oh, it’s such a blessing. It’s the subtle, brilliant joke that only she could do. It’s playing off this idea that we’re supposed to present a vision to the world that we’re perfect. We have a kid and life is perfect and it would be shameful to say anything otherwise.

Q: Was there a trick to sort of modulating what you would show and what you wouldn’t show, so as to not maybe scare off people from motherhood? Because it can be kind of scary sometimes, and wonderful, too.

Jason Reitman: I don’t think any of us ever had a conversation about, we should really hold back here. I think there is a current in our culture that we’re not really supposed to tell our kids about sex because then they’re going to want to do it and we’re not really supposed to tell them about child-rearing because then they won’t want to do it. But I feel like they’re going to do it either way, whether you tell them not, so you might as well.

Q: Charlize, I read your interview with Chelsea Handler and you gained a lot of weight for this film and you said that you experienced a bout of depression yourself. In the film it’s “Girls Heal — No They Don’t.” That was a very significant line when you talked about postpartum depression. What do you want people to take from that line? How do you think people should feel from that?

Charlize Theron: I think it lives in a gray area for all of us. Right? It’s different for all of us. I do kind of agree with what Chelsea said in that interview, that we hurt differently than men and I think we carry pain differently to men. You know, I love that line. I loved saying it. It felt so right for Marlo. But when I think about myself, I don’t necessarily know that I believe that wholeheartedly. I don’t know if what we experience isn’t just part of a building of who we are — and is that a bad thing?

Does that mean you’re broken? Is that the part that never gets fixed? I don’t know. I kind of like not knowing, too. I think that it’s going to be something that I’m going to experience more, as my journey continues as a woman and as a mom. 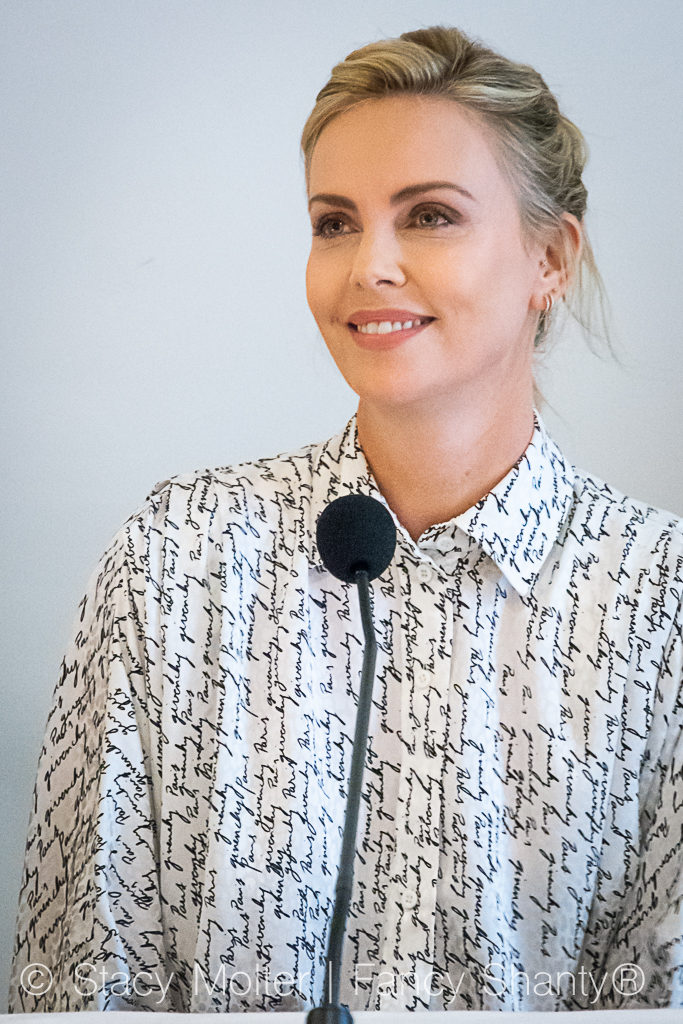 Q: Mark, what was your takeaway from the movie as far as motherhood?

Mark Duplass: I remember when I first read the script, it reminded me of a conversation I had with I had with my wife, who I think in some ways was like the earlier version of Marlo that’s hinted at a fun-loving person, able to throw parties, and I think she really envisioned that she would be able to have it all and do it all. Like, somehow the Gwyneth Paltrow lore was achievable and people would look at her, and we always had this joke where we say, how does she do it? Everybody wants that question asked about them.

My wife and I always joke about how she has to avoid that desire to have people saying that about her and admit that — well, I do it because I cry a lot in between and I get a shit-ton of help. That’s how I do it.

The character Craig is interesting to me because he is a white, privileged male trying to tell a mom how to live her life, which is like, cut the mansplaining. Right away it’s a problem. But, at the same time, the core of his message of being able to admit that you need some help, there’s no shame in that. So I like that little complexity there. 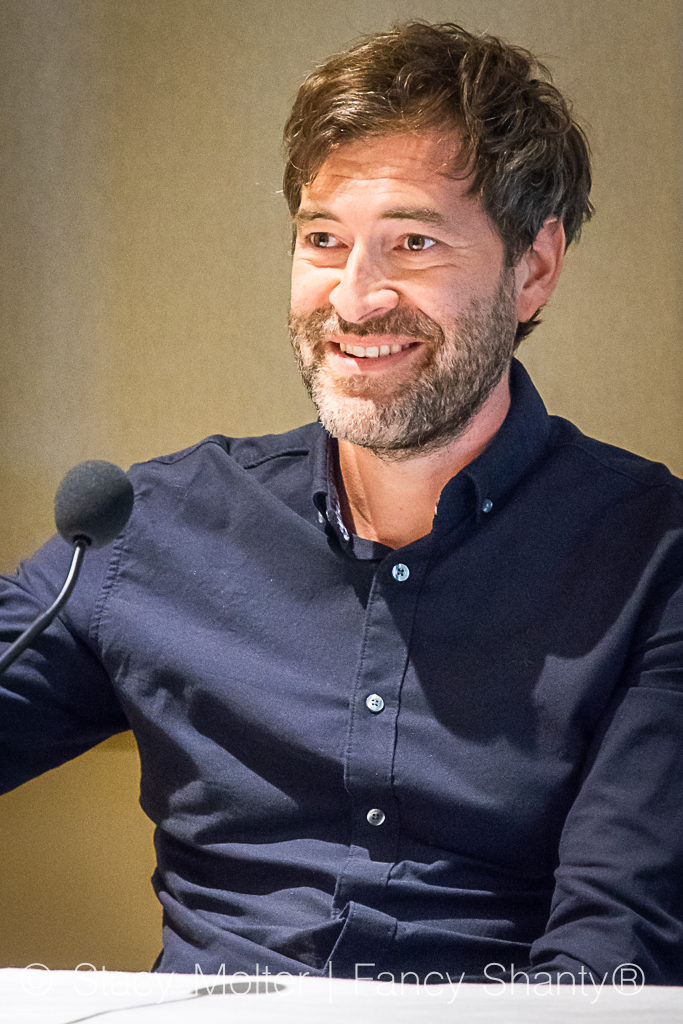 Q: Do you think that the timing of this film being in 2018, talking about the common practice of using night nurses — if it were earlier, do you think it would be as relevant?

Jason Reitman: One of the lovely things about the screenplay for this film is it plays this trick. Where for the first half you are given the impression that you were watching a movie that is solely about motherhood, and what you come to realize when you get to the end of the movie and you realize, oh, you were watching two movies at the same time, but during it, you only thought you were watching one.

To speak to your question of would this movie be relatable at another time? I think people have always felt that thing, that I don’t know where I am in the arc of my life.

Charlize Theron: I think there’s something about being a parent that just is the same for everybody. There was this documentary a couple of years ago called Babies. I saw it right before my kids came into my life and it really moved me because ultimately what you see is the one thing that I think we all share, is just that we’re trying to get through every day and to hopefully be the best things for your kids. It might be different in how we go about it in different countries, but I think, as mothers, every decision gets made based on our kids. Like — or at least I have found that.

There’s a thing in South Africa, we have this saying, “It takes a village to raise a kid,” and I was raised that way. I grew up with a lot of people around me and my mom, really sharing me with a lot of people. It was great to grow up that way and, for me, it was always going to be how I was going to raise my kids and from the moment they came home, that first night, my village was there and they got to meet their village and that village is in their life now and I think will be in their life forever. 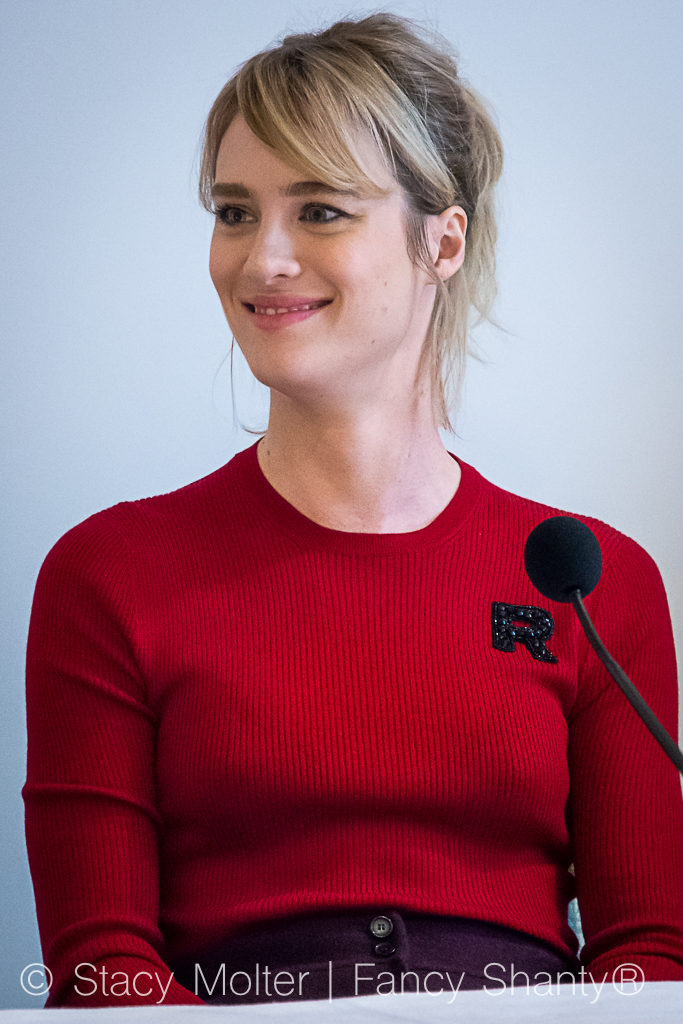 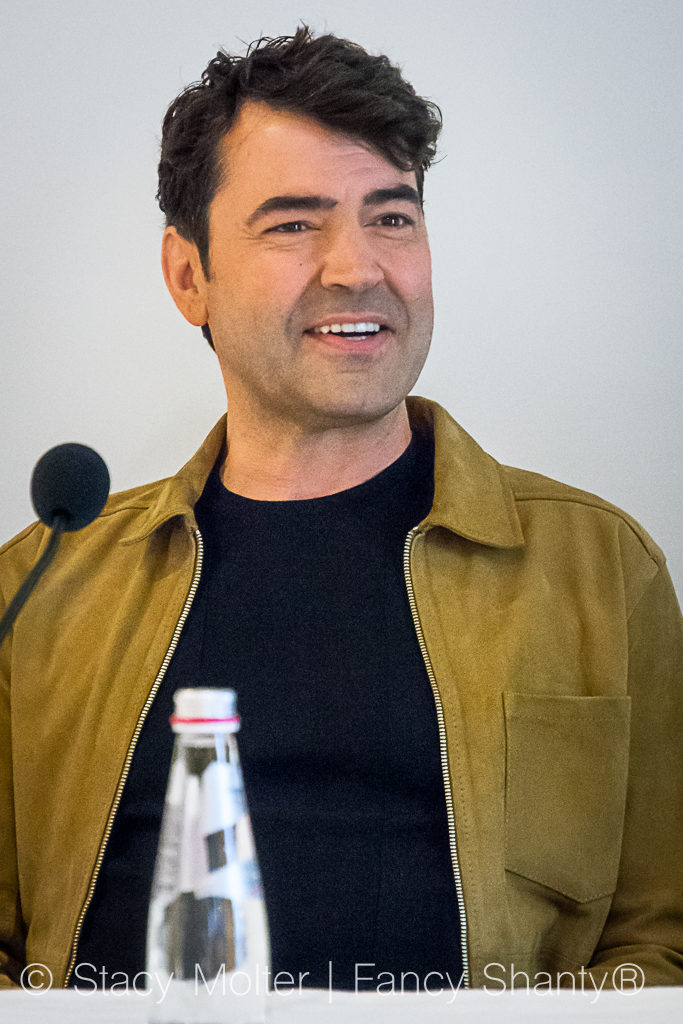 A new comedy from Academy Award®-nominated director Jason Reitman (“Up in the Air”) and Academy Award®-winning screenwriter Diablo Cody (“Juno”). Marlo (Academy Award® winner Charlize Theron), a mother of three including a newborn, is gifted a night nanny by her brother (Mark Duplass). Hesitant to the extravagance at first, Marlo comes to form a unique bond with the thoughtful, surprising, and sometimes challenging young nanny named Tully (Mackenzie Davis).

Portions of the material for this post have been provided courtesy of Focus Features.