You are here: Home / Entertainment / Visit the Walt Disney Archives

Thank you to D23 for hosting us at the D23 Media Event.

While at the Disney D23 Media Day last week we had the opportunity to do something I have always wanted to do, visit the Walt Disney Archives. The Walt Disney Archives was established in 1970 to collect, preserve, and make available for research the historical materials relating to Walt and the company he founded, and as a unique way of preserving the creative legacy started by Walt Disney. 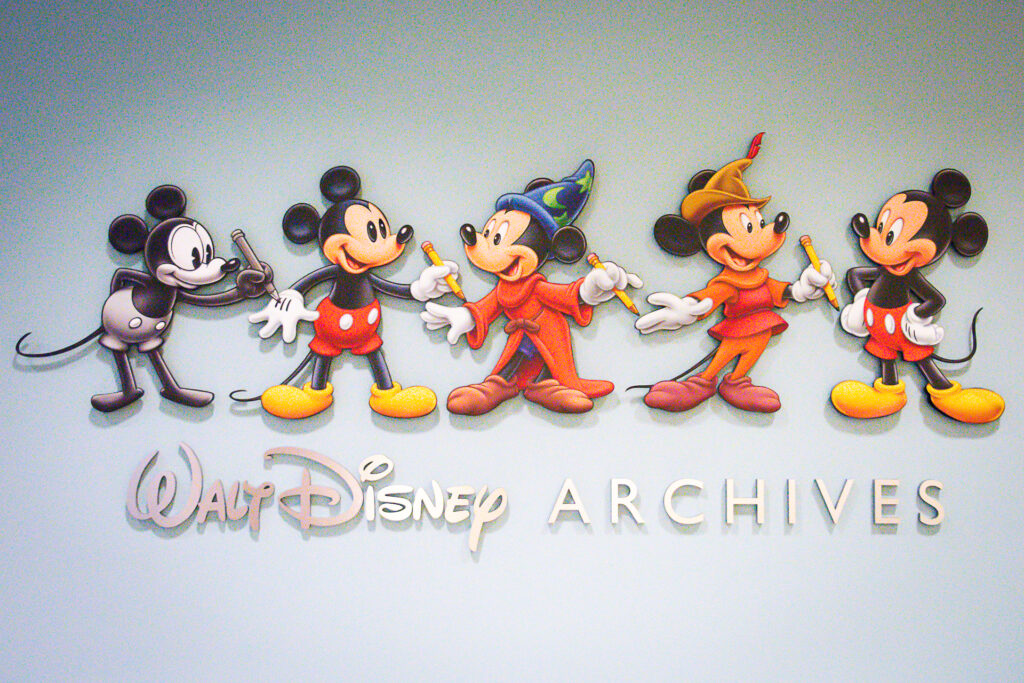 One of the biggest exhibitions that are put together at the Archives is for the D23 Expo. The Archives has created a unique exhibition for every D23 Expo, beginning with the first Expo in 2009 as a very small exhibition on the second floor. This year, the exhibit will be on the show floor and it is estimated to be about 12,000 square feet and will have an entirely different theme than in the past.

Since this year's theme is still a secret, yes, we asked, we enjoyed the special opportunity to check out a few vintage Mickey Mouse items from the Walt Disney Archives in celebration of the 90th anniversary since his big-screen debut in Steamboat Willie, on November 18th, 1928.

We're in love with this 90th-anniversary painting created by Disney animator, Mark Henn. 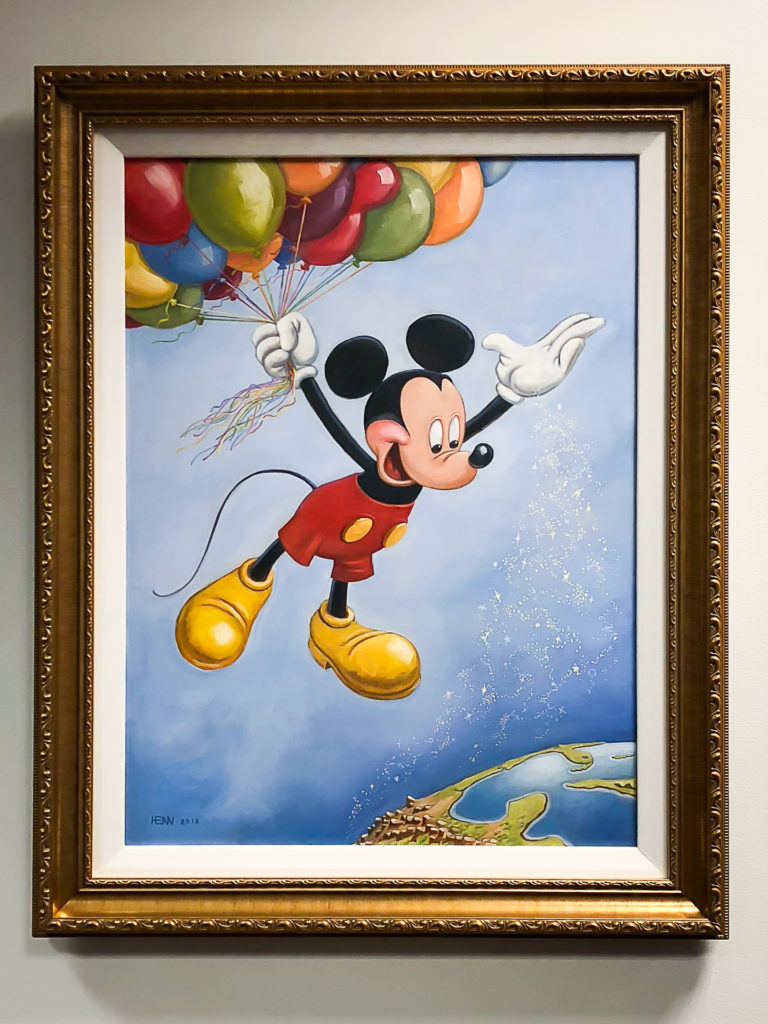 The most historical item we saw from the collection of special pieces from the Archives was an original cell with the original background from Mickey's first movie, Steamboat Willie. If you're not familiar with cell animation, especially in the early days, animators would paint a celluloid for an animation, photography the cell, then wash it off and reuse that blank cell because celluloid was so expensive, which is why it's extremely rare to have a black and white cell. In addition to the original cell from the film, the Archives also holds the original script from the film. 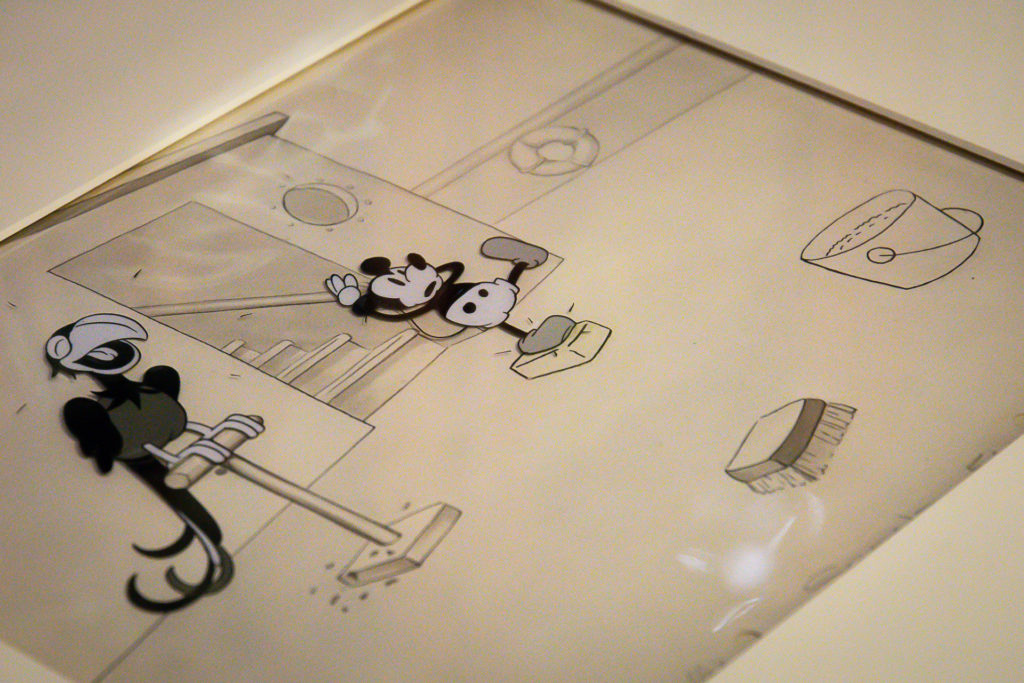 And here's a fun story from Walt's early days.

While Walt Disney was in New York working on his Mickey Mouse cartoons, a man came running up to him with $300 in his hand and asked for the rights to put Mickey Mouse on a school tablet, and, since Walt desperately needed the money, he said sure! As you can see below, the little-battered tablet on the bottom left was the first piece of Mickey Mouse merchandise created.

Also, pictured below, are some of the first books published about Mickey Mouse, including the story of Mickey Mouse. 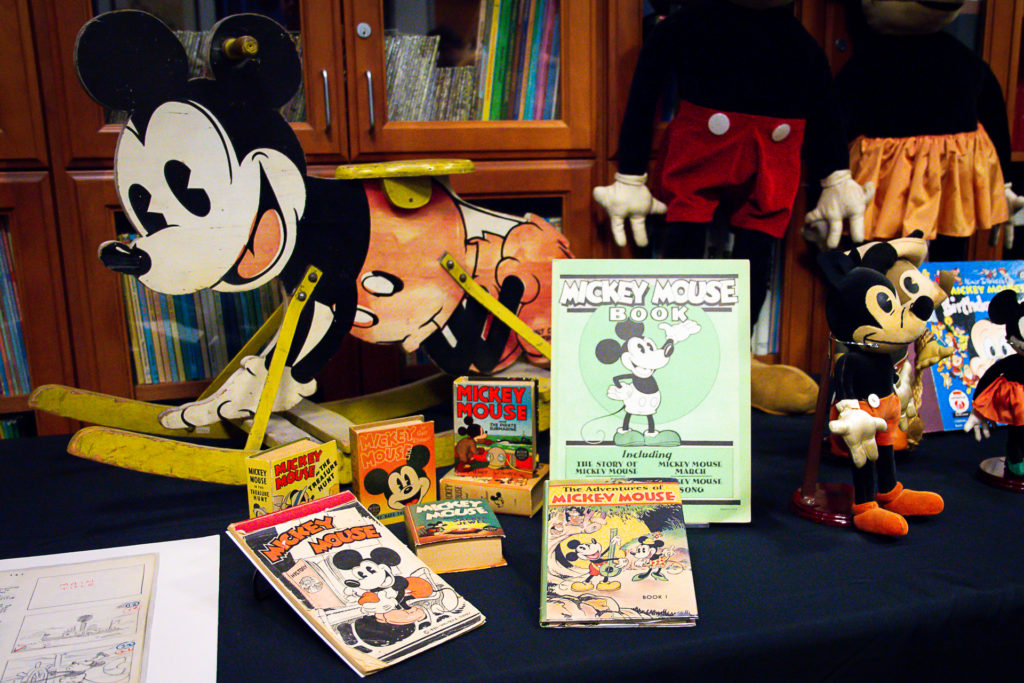 The first plush dolls of Mickey Mouse were hand stitched and given to Walt by Charlotte Clark, a local seamstress who lived in Burbank and loved Mickey. Walt loved them so much he decided it would be a great idea to make more dolls and sells them. He set up a shop for her near the studio and she began handmaking these dolls with other seamstresses. After the demand for these dolls became too high, she created a McCall's pattern which could be purchased so anyone could create the dolls at home. 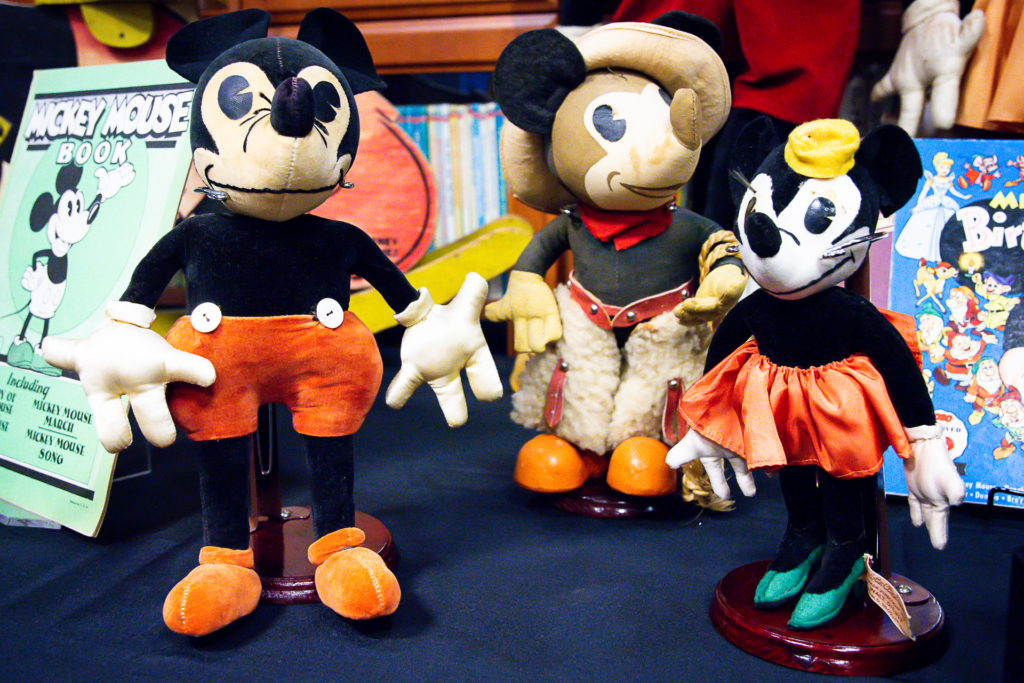 This first Mickey Mouse watch came out in 1933, by Ingersoll.  The watch was created for the 1933 World Fair in Chicago and it sold so well, it actually saved the Ingersoll company from bankruptcy during the great depression. Ingersoll is still around today, they've just changed their name from US Time, to what we know now, Timex. 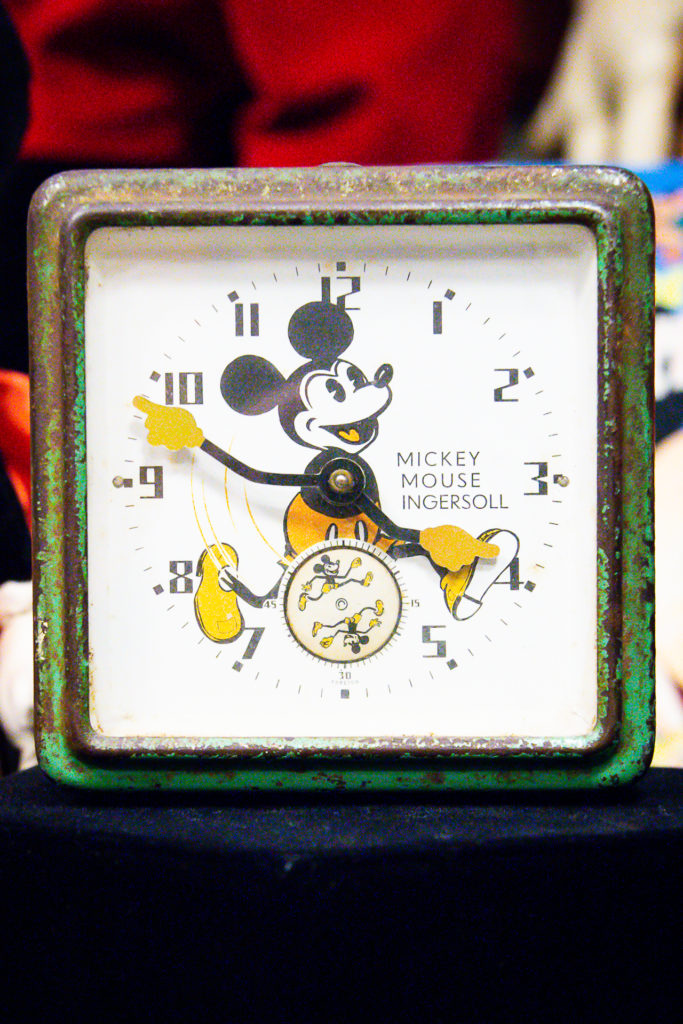 This Engineer Mickey doll is one of a kind. It's was made specifically for one purpose, to ride with Walt in on the train opening day at Disneyland. So, when you see the footage from Dateline Disneyland, July 17th, 1955, when Walt steams in for the opening of the park, he's got this Engineer Mickey with him in the engine. 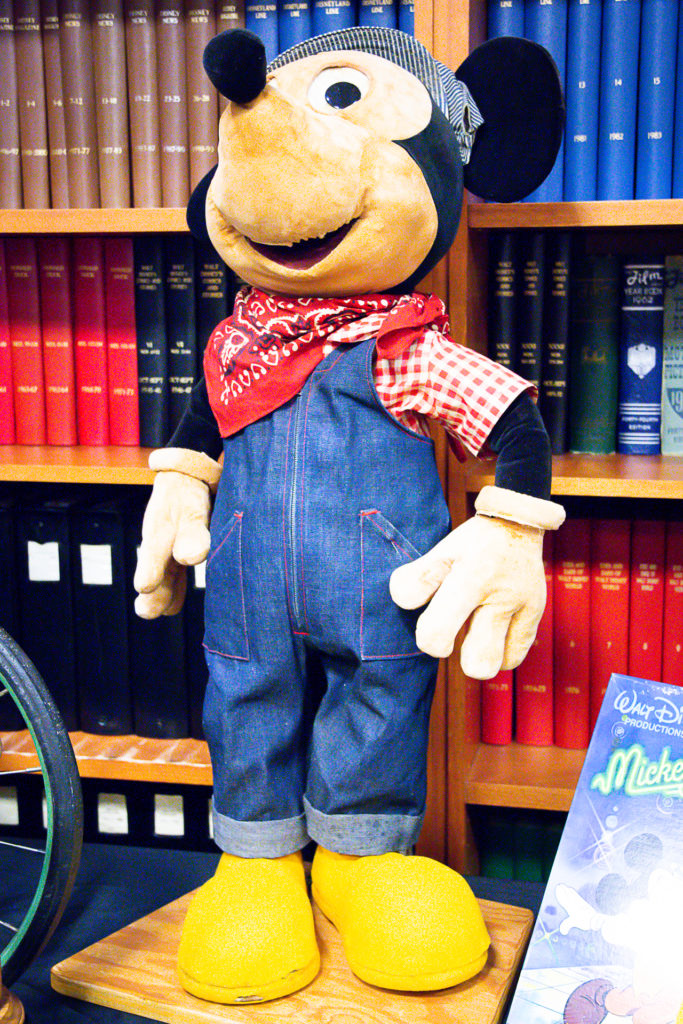 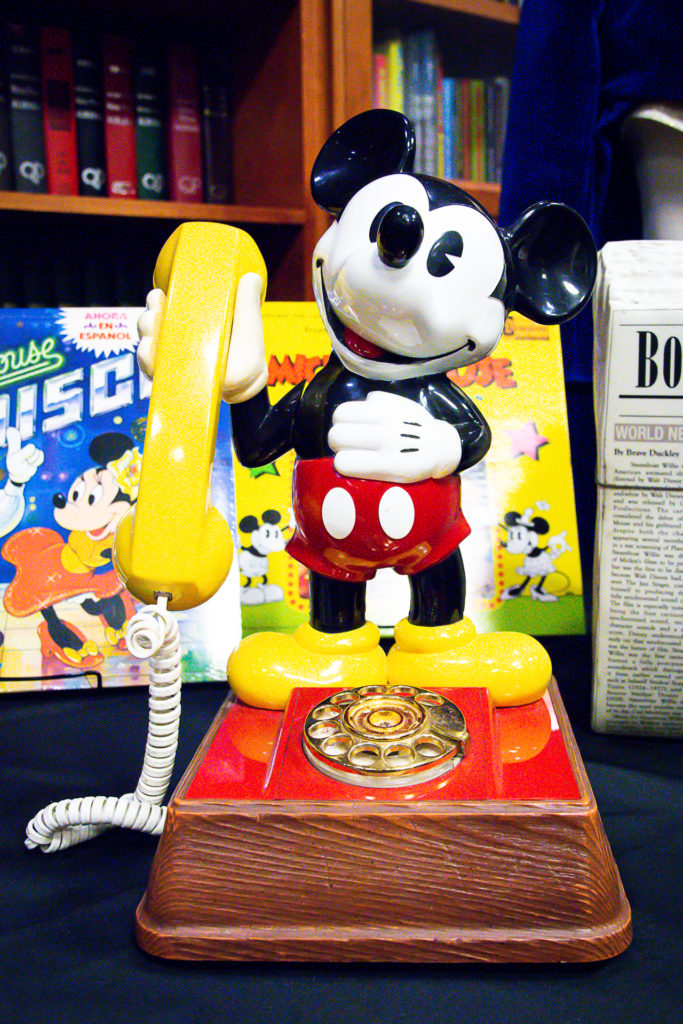 The largest exhibit in the Walt Disney Archives is a detailed recreation of an animator’s office from 1940s, the year The Walt Disney Studios debuted its new Kem Weber-designed facility. 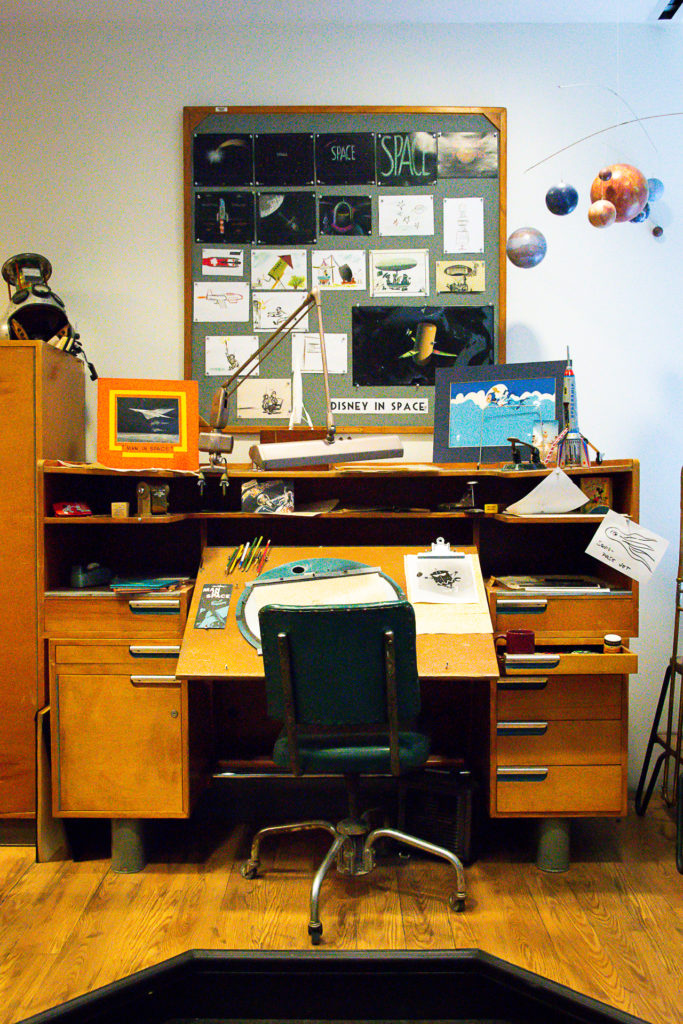 D23 Members will have the rare opportunity to see this new exhibit and enjoy a two-and-a-half-hour tour of The Walt Disney Studios and Walt Disney Archives on September 8th, 2018. This exclusive experience includes a visit to Walt Disney’s office suite and Archives.

« When will my postpartum belly go away?
Better-than-Incredible Strawberry Pineapple Salsa »