“There is only one path to peace…The Avengers’ extinction.”—Ultron

In Avengers: Age of Ultron, the world order is hanging in the balance and the Avengers must stop Ultron from enacting his terrible plans as uneasy alliances develop and unprecedented on paves the way for an epic adventure unfolding on an unprecedented global scale.

Check out our Q&A with that cast from the Avengers: Age of Ultron Press Conference.

When I attended the screening for Avengers: Age of Ultron a few weeks back I brought our two older boys along to experience the amazing energy felt at a screening. An energy that is sure to consume audiences everywhere as they watch this blockbuster film, a film that broke international records its opening weekend overseas, and one that broke pre-sale ticket records as well. And, since our boys attended the screening with me, I thought it would be a fun change to hold a fun Q&A with them and get their take on the film.

In this epic follow-up to the biggest Super Hero movie of all time we're introduced to an all new villain, one of the most famous villains The Avengers have ever fought against, and he’s one of the most powerful.

The decision to give Ultron his day in the sun as the villain of the film was always Whedon’s first choice despite the end sequence in Marvel’s “The Avengers,” which featured the character of Thanos. The writer/director explains, “For me Thanos was always meant to be in the third Avengers movie because he really is a god,” explains Whedon.

With the storyline for the film decided, the filmmakers also felt it was important to inject a global relevance into the story for the film as well. “We’ve always considered The Avengers to be sort of the world’s heroes,” says Kevin Feige. “Not just America, not just any particular region, but globally and certainly the results of the first movie proved that. When we started developing the story we knew we wanted to take it out of New York. Some of the movie does take place in New York, but we wanted to send The Avengers to the far reaches of the globe so it’s legitimately a globe-trotting adventure.

Q: Boys, what was your favorite part of the movie?

Kevin: I loved the first part of the movie when the Avengers invaded Hydra's secret base where the twins were hiding, because there was lots of action, awesome fight moves, and lots of action. The fighting was awesome!

Hawkeye, my favorite character, has some impressive new weapons, ones like I've never seen before, and it's nice to see him be more of a part of the team. 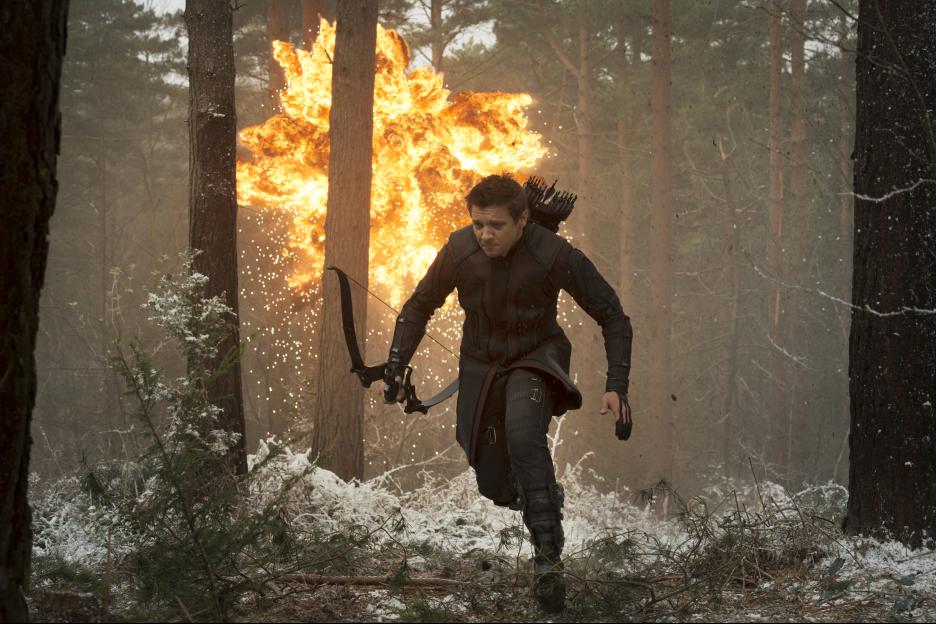 Lewis: My favorite part of the movie was the big fight scene at the end. When Earth's Mightiest Heroes went up against Ultron and the robots. And the Hulkbuster suit. That was pretty cool too!

Q: Being twins, what did you think about the newest characters, Maximoff twins Quicksilver and Scarlet Witch?

Kevin: He's fast and she's weird. It's crazy how she can alter the Avengers minds to turn them against each other like she does.

Q: What about the connection they have with each other? Being twins and all?

Lewis: They're so close it's crazy. Kind of like us, you can see how in touch with each other they are. They protect each other and really love each other. That's what makes the ending of the movie so sad. 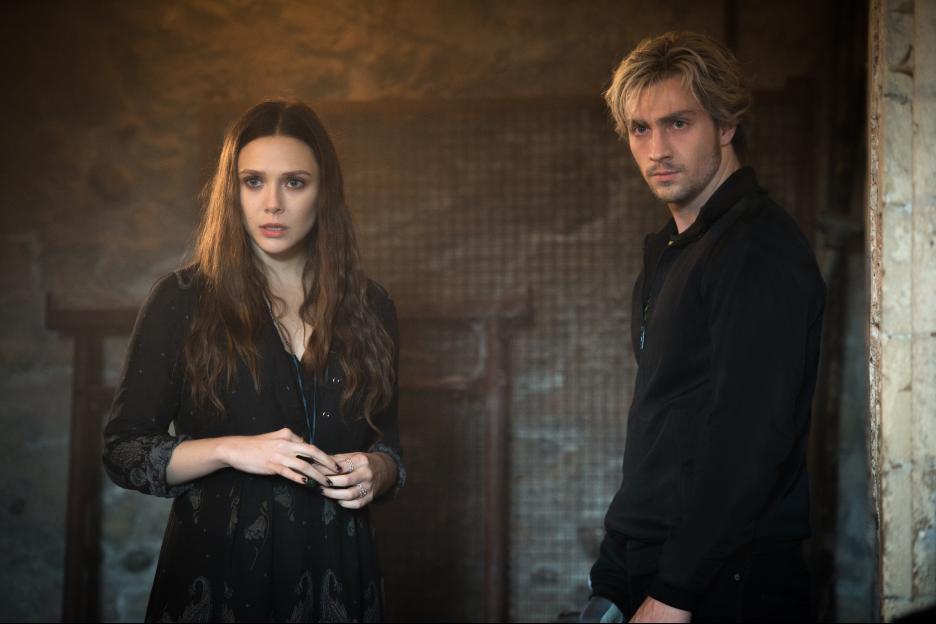 Q: Tony Stark tried to create a suit of amour around the world to protect it, but created something terrible instead, Ultron. Where do you think Tony Stark went wrong?

Lewis: Tony Stark shouldn't have ever created anything as powerful as Ultron, especially since Ultron turned against the Avengers and tried to kill them. In a way, Ultron and Tony Stark are a lot alike, in the way they think.

Kevin: But without Ultron, Vision wouldn't have been created, and the Avengers need Vision, for the future. Vision can bring peace to the world.

Q: How truly epic is the action in this film?

Lewis: The action is epically awesome! There was so much more action than in the first Avengers. The fights were better, and there were more of them. I really loved this movie!

Kevin: I loved all the new weapons. The new costumes were cool too! The Avengers needed new weapons to fight Ultron and they got them. They couldn't have fought Ultron without them.

Q: Do you have any guesses on what Thanos was doing in the post-credits teaser?

Lewis: I think he's going to come back to collect all the Infinity gems, and try to rule the universe.

Kevin: Maybe he'll be in Guardians of the Galaxy 2 or Avengers Infinity War? That would be amazing!

Q: What about Vision. Did you trust him to be true to Tony, or were you worried he had the mindset of Ultron?

Q: Would you both recommend this film to your friends at school?

There you have it. From the minds of two 9-year-old boys this film is epically awesome with more action that one boy can handle. And it has cool new weapons. We can't forget the cool new weapons.

Avengers Age of Ultron Review – From a parent.

I have to agree with my boys, this film is epically awesome!

The film opens with an awesome fight scene as the team embarks on a mission against Hydra, showing how much of a well oiled machine the team really is. This also where we get a first glimpse at the newest characters from MCU, the mysterious Quicksilver and Scarlet Witch.

Ultron, who was originally created by Tony Stark to find peace within the world, quickly becomes a threat as his ultra-intelligent programing leads him into an obsessively psychotic state of mind, making him believe the only path to peace is to destroy the Avengers.

Under Ultron's orders, Scarlet Witch uses her hypnotic powers to take down the Avengers and turn them against each other while Quicksilver uses his superhuman speed to taunt the heroic team. It quickly becomes clear that team relations are not going to hold up under the strain of Ultron.

As the Avengers begin to crumble under the mental anguish of Ultron, we learn more about Black Widow's dark and hideous past. As she reflects on her past life, she finds a new connection with the Hulk, one that reveals the true pain and suffering each character continues to endure in their altered life.

And of course there are the questions we're left with as the film ends. After all, it wouldn't be a Marvel film without audiences being left scratching their heads with more than a few questions.

Is this finally the end of the Avengers?

Why did Thor disappear into a cave?

Did Hawkeye leave for good?

Why did the Avengers go their separate ways at the end?

Will we see Thanos in Marvel's Avenges: Infinity War?

And just who is a part of the new team of Avengers we see at the end of the movie?

I guess we'll just have to wait and see what Joss has in store for the future of MCU.

Is Avengers: Age of Ultron a good movie for kids?

The language in the film is extremely kid-friendly, except for the one time Iron Man slips and you quickly hear Captain America call him out on his use of bad language, an incident which becomes a light-hearted joke throughout the entire movie.

Ironically, at the end of the movie, we hear Captain America himself slip with one inappropriate word and the team calls him out just as he called our Iron Man, a sequence which left our kids giggling in their seats.

There is plenty of adult humor to keeps parents laughing, which (thankfully) our children didn't catch on to. Or, maybe they did and just didn't say anything. I may or may not have heard a few extra giggles that night.

Overall we recommend this movie for anyone who loves fast-paced, action-packed sequences, young and old alike. Our kids LOVED this film and I know your kids will too!

And don't forget to check out the latest Avengers: Age of Ultron clip below featuring one of the lighter moments in the film, as the Avengers take turns trying to lift mighty Thor's hammer, to no avail of course. Marvel’s “Avengers: Age of Ultron” is rated PG-13 and playing in theaters everywhere!

About Avengers: Age of Ultron

Marvel’s “Avengers: Age of Ultron” stars Robert Downey Jr., who returns as Iron Man, along with Chris Hemsworth as Thor, Mark Ruffalo as Hulk and Chris Evans as Captain America. Together with Scarlett Johansson as Black Widow and Jeremy Renner as Hawkeye, and with the additional support of Don Cheadle as James Rhodes/War Machine, Cobie Smulders as Agent Maria Hill, Stellan Skarsgård as Erik Selvig and Samuel L. Jackson as Nick Fury, the team must reassemble to defeat James Spader as Ultron, a terrifying technological villain hell-bent on human extinction. Along the way, they confront two mysterious and powerful newcomers, Pietro Maximoff, played by Aaron Taylor-Johnson, and Wanda Maximoff, played by Elizabeth Olsen and meet an old friend in a new form when Paul Bettany becomes Vision. 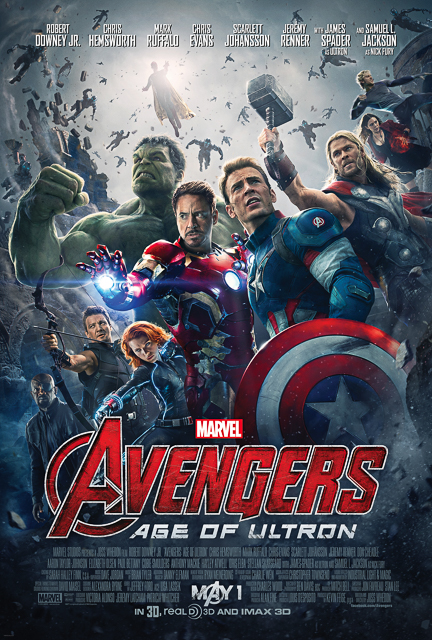 Written and directed by Joss Whedon and produced by Kevin Feige, p.g.a., Marvel’s “Avengers: Age of Ultron” is based on the ever-popular Marvel comic book series “The Avengers,” first published in 1963.

Portions of the material have been provided courtesy of Walt Disney Studios, all opinions are my own.