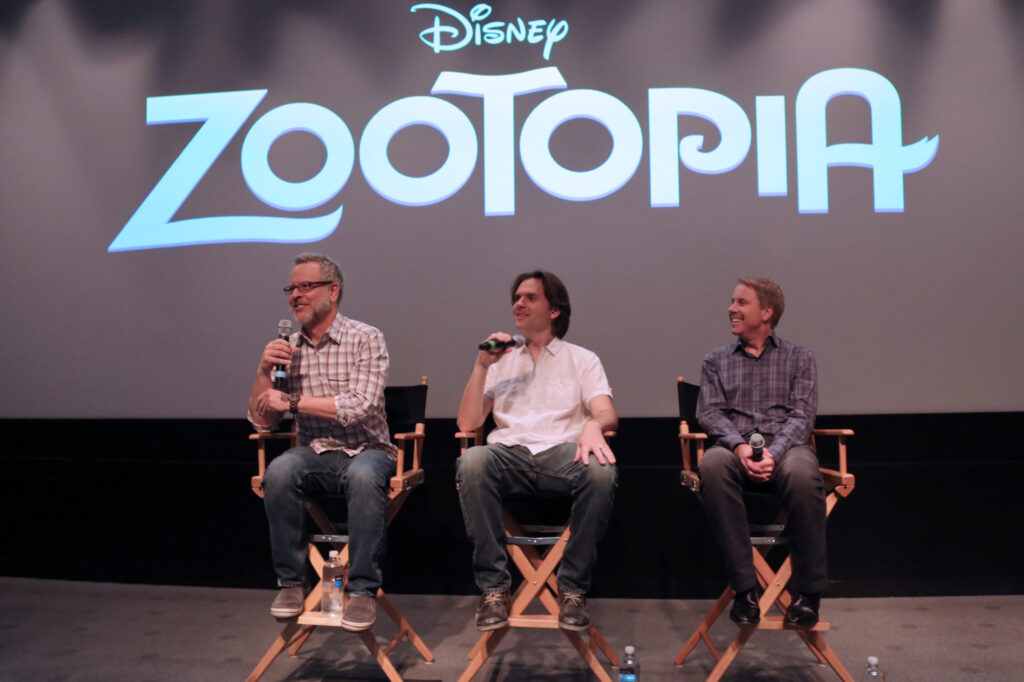 For more on Disney's newest animated film Zootopia, check out: Building a Magnificent Mammal Metropolis, Creating the Citizens of Zootopia, Anim(al)ation – Merging Animal and Human Behaviors Together to Create Zootopia

As the presentation began, filmmakers Byron Howard, Clark Spenser, and Rich Moore shared with us the imagination behind the Disney legacy, and why Disney continues to make some of the most unforgettable films.

Some of the greatest films ever made were made by Walt Disney and the Disney artists. Contemporary and ground breaking films that are inspired by their long legacy of innovation and great story telling.

Ten years ago John Lasseter and Bob Iger joined Disney, and one of the first things they did was put filmmaking back in the hands of filmmakers, not in the hands of executives. What they started was something called the story trust. It's a mix of veterans and young talent. Directors, writers, and story artists who challenge each other every day to push Disney films to a new level of excellence.

With the story trust came the four ingredients to every Disney film made.

Next, it was time to learn more about the newest animated film from Walt Disney Studios, Zootopia, set to open in theaters on March 4, 2016. As the flimmakers shared broad details about the film, we learned more about Zootopia's two best-loved characters, Judy Hopps and Nick Wilde.

Every Disney film begins with research. For the film Zootopia, the directors spent 18 months studying animals. Their research took them to Animal Kingdom at Walt Disney World where they met with some of the best experts in the world, and to Kenya, Africa to study animals on the savanna to get a sense of their movement in their natural environment. As the directors got closer to some of the animals, some of the animals got closer to them. When they left Africa, their lives were truly changed.

As animation began on the film, the directors first looked at the animals walk cycles. Take giraffes as an example, while in Africa the directors realized when giraffes run it actually looks like they are running in slow motion and they wanted to keep that same believable movement once they put them up on two legs in Zootopia.

The directors also watched elephants utilize their trunks as an arm in their natural environments and so they thought, how would an elephant serve ice cream in the world of Zootopia? But they still had one important task they had to solve in the animation, and that was how does a tiger dance? The animators are having a bit of fun with this one.

One of the most unique things about Zootopia is the amazing city in which all of these animals live. The city of Zootopia is designed by animals, not by humans, and because the city has animals of every shape and size, from jumbo to itty bitty, scale was a key ingredient of this film. Zootopia had to be built for everyone.

The Metropolis of Zootopia

Zootopia is complete with a different neighborhood to celebrate different climates. Sahara Square is hot and dry, similar to an upscale Monte Carlo with high-end shops. Chilly Tundra Town is where the cold animals live, and they have their own coolant under the sidewalks and a 3 o'clock blizzard. The Rainforest District is wet and humid with a  full, beautiful foliage canopy.

To keep the climates separate yet in one city, the animals built a massive air conditioning/heating wall which stretches across the city. Up top in Sahara Square the hot air blows across the desert, and in Tundra Town the snow cannons and slow blowers keep the temperature chilly. Then, as the snow melts, it feeds the water and the misters that keeps the rainforest humid.

The best thing about having all these unique neighborhoods in one city, it that we all get to go on an international tour in one massive metropolis.

Just like our own world Zootopia is not perfect, and we find the animals are quick to put each other in a stereotypical box. Elephants always remember, weasels are sneaky, donkeys are stubborn, and so on. Judy Hopps, a little bunny from Bunny Burrow goes to the big city to follow her dreams and become a the first bunny cop with the Zootopia Police Department. A really big deal because all the cops in Zootopia are large animals like buffaloes, rhinos, and hippos.

Judy Hopps in an optimist who lives by the mantra ‘Anyone can be anything.' She believes this to her core, but when she arrives at the Zootopia Police Department she's hit with the harsh reality that while the large animals get the really cool assignments like SWAT and Vice, poor little Judy Hopps gets parking duty. While Judy is disappointed because she wants to be a real cop like the bigger animals, not a meter maid, she is determined to make the best of the situation.

When Judy sees a sneaky looking fox enter an ice cream parlor owned by an elephant, she gets suspicious and decided to investigate. Judy had always heard foxes were sneaky and untrustworthy but this fox could not have been nicer, and Judy feels really great about herself.

Until she discovers that same fox melting down that Popsicle in Sahara Square and refreezing the Popsicle juice in hundreds of smaller Popsicle in Tundra Town and reselling them to the lemmings for pure profit. And because he is so green, he uses the recycled Popsicle sticks as lumber and sells them to the mice in Little Rodentia. Hopps is furious she's been duped, and the sneaky fox is being his exact stereotype.

The next day though, through a series of circumstances Hopps gets a break and her boss if forced to give her a case. But there's a catch. She only has 48 hours to solve the case or she is off the force. Judy jumps at the chance and accepts the deal, only to discover there is only one lead witness. Nick Wilde.

Nick knows Judy only has 48 hours to solve the case, so he takes her all over Zootopia starting with the Zootopia DMV.

As Nick enjoys making Hopps life miserable, she is determined to prove that she's capable of being a real cop even if she is just a rabbit. It's here that these two are most at odds, and their relationship is truly tested at the hands of the most feared crime boss in Zootopia, Mr. Big.

As Judy and Nick continue to unravel the mystery, they discover the case is part of something much more complex. Nick and Judy have to look past their stereotypes and learn to trust each other if they're going to have any chance at preventing the city of Zootopia from being torn apart.

Ultimately, these two natural enemies heal the city and make their most important discovery of all, if we learn to look past what we are,  we just might discover who we are.

Determined to prove herself, she jumps at the opportunity to crack a case, even if it means partnering with a fast-talking, scam-artist fox, Nick Wilde (voice of Jason Bateman), to solve the mystery. Walt Disney Animation Studios’ Zootopia, a comedy-adventure directed by Byron Howard (“Tangled,” “Bolt”) and Rich Moore (“Wreck-It Ralph,” “The Simpsons”) and co-directed by Jared Bush (“Penn Zero: Part-Time Hero”), opens in theaters on March 4, 2016.

Portions of this material have been provided by Walt Disney Studios. Photos by Alex Kang. ©2015 Disney. All Rights Reserved.