Shortly after our interview with Disney•Pixar’s The Good Dinosaur Director Peter Sohn and Producer Denise Ream, we sat with the cast of the film to learn more about the voices behind the characters. 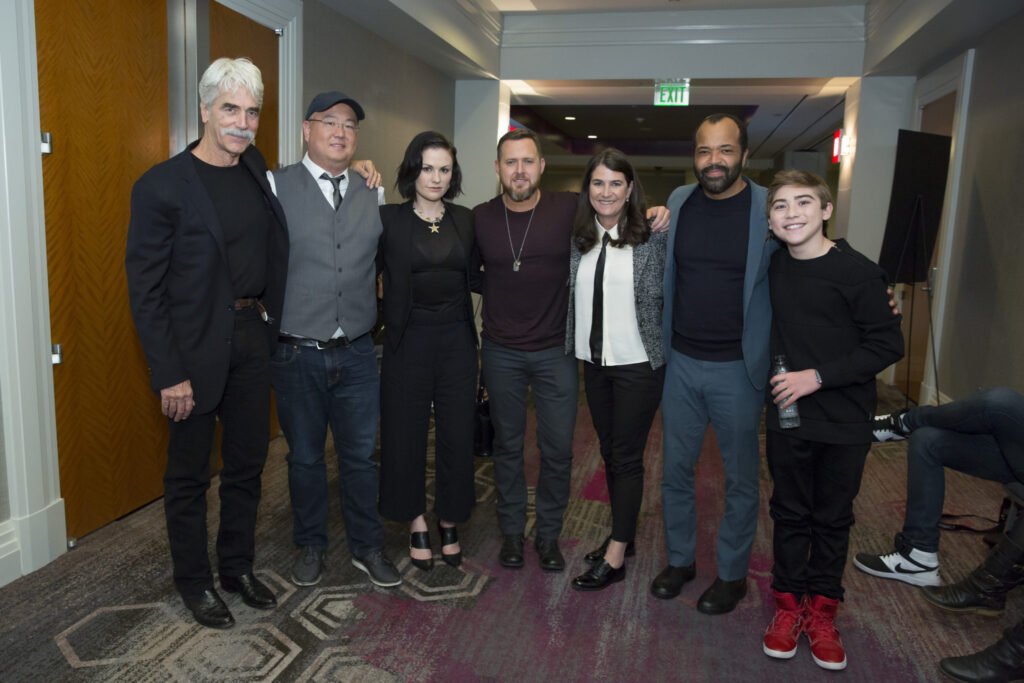 Interview with the Cast of Disney•Pixar’s The Good Dinosaur

Q: In terms of the conversations with Peter, talk about what goals you talked about and what you were going for with the characters. What were the challenging moments for you?

Raymond Ochoa: Peter was so helpful in telling us what the characters were. Their backgrounds. Their ideas. He told me what I was scared of. I thought he was this brave dinosaur, because that's what I think dinosaurs are. They are brave, but that's not Arlo. He's not like that.

The fact that I had to talk like a dinosaur that’s not outgoing, he's very scared, he's shy, he's not like how I am, that was when real acting had to come out. Because that's not me. I had to bring out my old self, because I was like that at one point. I had to reach into really deep into my old self. 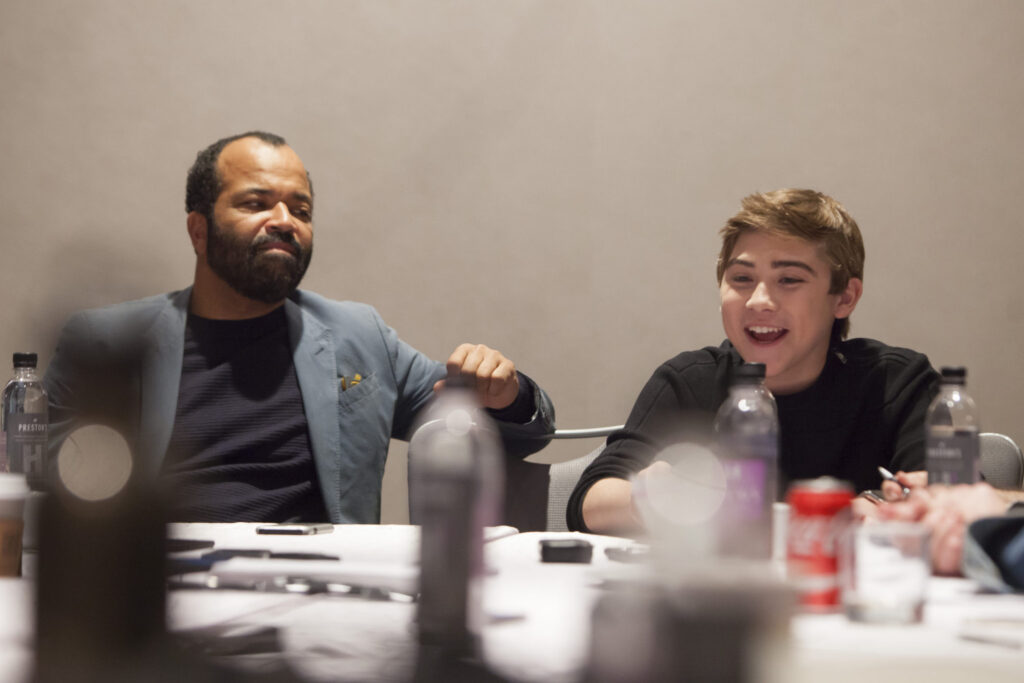 Q:   What was the specific pitch that you got in terms of your characters, what Pete was looking for?

Anna Paquin: I had already said yes before they actually told me what it was about. I want to say that they seemed ever so slightly nervous that I might be offended that they wanted me to be this big, bad-ass T-Rex. I was bracing myself to be some little thing that's really wimpy, because I'm a girl. I'm like, “That's fantastic,” and they're like, “Really?” And I'm like, “Yeah, that's awesome! I get to be, you know, one of the dudes.”  Except a girl. Even cooler. 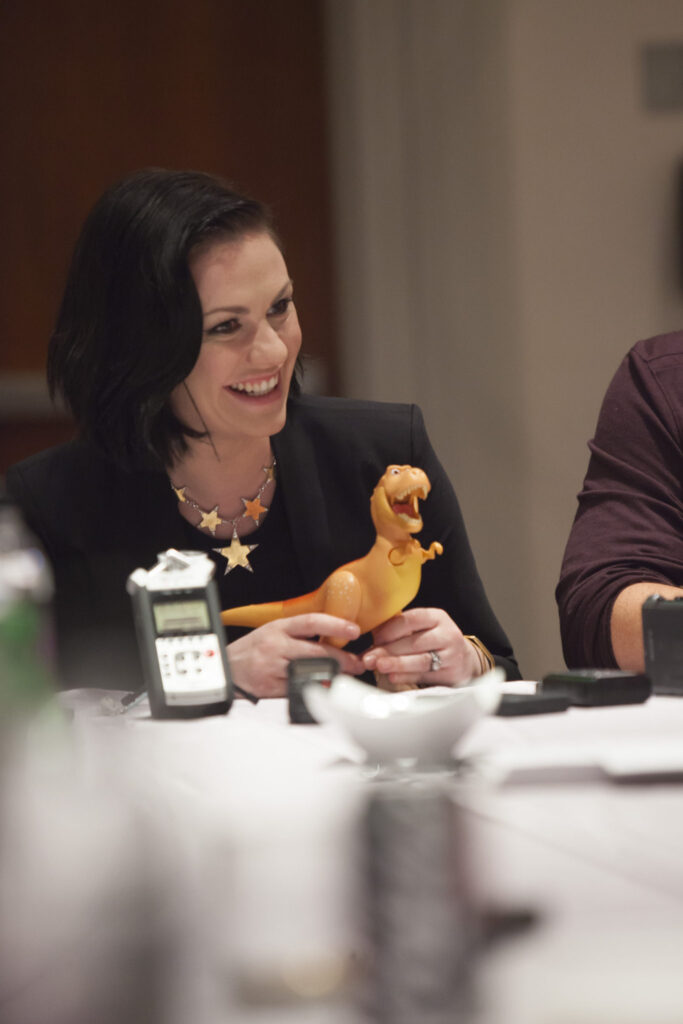 Q: Did you guys do any T-Rex research to prepare?

Anna Paquin: My kids have this really cool series of books called “How Does a Dinosaur Clean Up His Room”. I don’t know if any of you guys have kids or have seen this. It's using dinosaurs to teach important childhood lessons and life skills and morals. There's quite a lot of it in our household at the moment.

AJ Buckley: I was obsessed with dinosaurs as a kid. I was, many times, grounded for digging up my mom's beautiful backyard looking for fossils, and using my dad's toothbrush when I thought I'd found something and needed to gently scrape the dirt off. I was a big fan of dinosaurs, back in the day. Not that I know all of the facts, but I just geeked out you know. I was ready.

Q: Being of a still-learning school-age class, what kind of research and preparation do you do going into a film like this? Did you call on what you'd learned about dinosaurs?

I didn't know what an apatosaurus was at the time, but you kind of get to learn those things. I saw a picture of it, and I was like, “This dinosaur doesn't look that mean.” But, you know, it doesn't look kid-friendly at the same time either.

Q: What were your conversations like in terms of developing what they wanted from the character personality-wise, as well as your catalyst for the story itself?

Sam Elliott: The first thing I saw was words on a page. You see the scenes. You don't see the script. You just see the scenes that you are involved with. A rendering in terms of an eight-by-ten rendering of what this character looked like. When we got into the studio with Pete, I didn't go off to Pixar to their facility, up north. I did mine in LA, and did it in a day.

When you go in there you meet this guy that is so enthusiastic, and so specific in his vision, and he has this incredible ability to draw that vision out of the performers, and that's a real gift of a director. As you saw, undoubtedly, through talking to him, he was a very enthusiastic individual, and a very sweet guy. He was the right guy to do this thing. It may be his first, but it's certainly not gonna be his last.

AJ Buckley: When I got out to see him, I asked him when we sat down, “Why did this happen?” He said, “I saw your character on Justified, and I loved the sound of your voice.” These guys were already cast, and they took scenes from Justified, and examined it, and mixed it with them, and it fit. He said, “I just want you to do Danny Crow,” and Danny Crow on Justified was this horrible, like, sociopath.

We were trying to find the voice and I was trying to figure out how to be a dinosaur, and be this guy. My character on Justified, chewed. So, I needed chew. They only had Jolly Ranchers there so I picked up a Jolly Rancher, and put the Jolly Rancher in my lip and Nash came out. 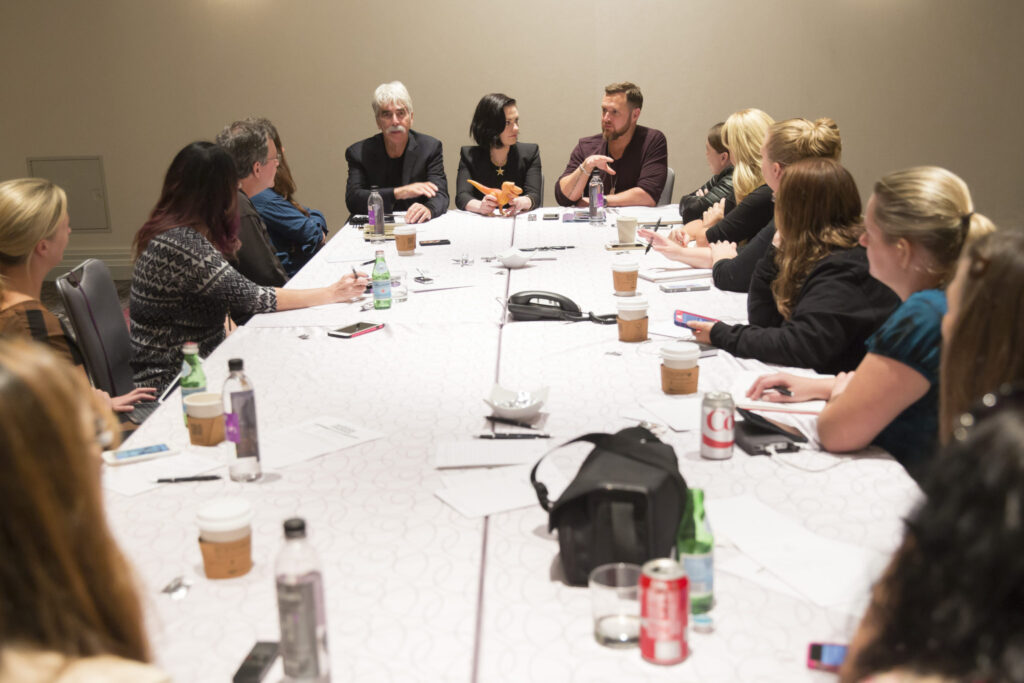 Q: What do you think this movie says specifically about fatherhood? Where do you draw a line on trying to push your son to be more than he is and being accepting of him for what he is?

Jeffrey Wright: That's the core issue and challenge for Papa, for my character. What I tried to draw on in order to understand the emotions and the dynamics of this relationship, was to draw on my relationship with my son and my daughter.

It's a really the central question of how. What level of encouragement or what level of pushing your kids does more damage than good. How do you strike that balance between a nurturing posture and one that's a bit too overbearing? 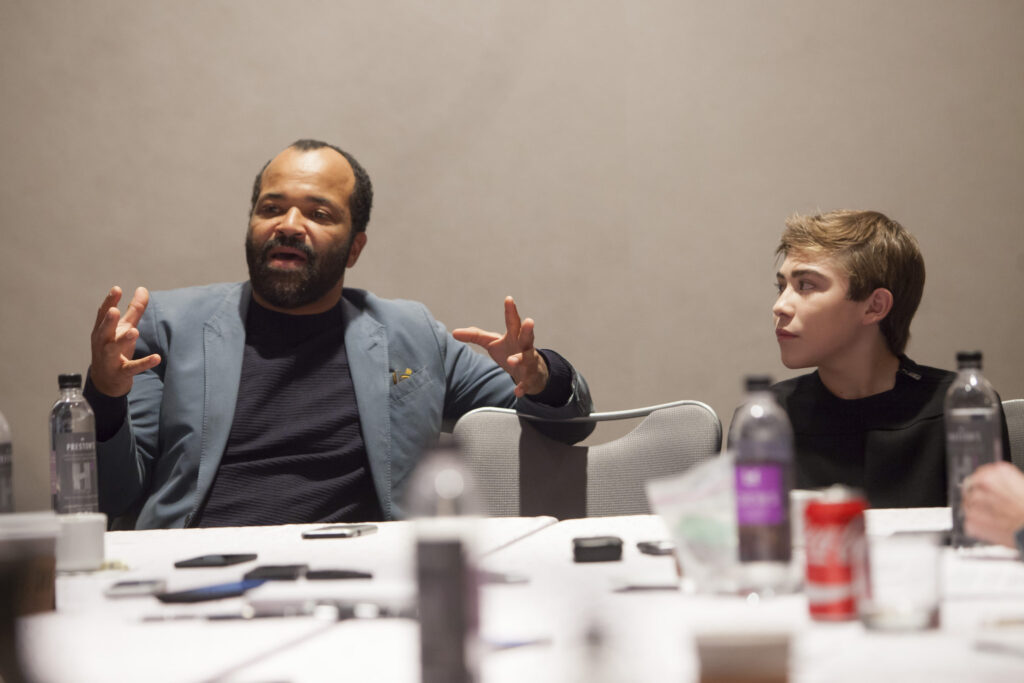 Q: Talk about what you think these characters will do in terms of how people perceive them, flipping that perception of dinosaurs on its head and surprising people.

Sam Elliott: Well, it's all of that. They're not typical of any T-Rex that's ever been represented on film or in animation that I'm privy to. I think that's part of the charm of this thing. Certainly all of the overriding themes that are involved, and whether it's the T-Rexes or the kid on his journey, this is about real life.

There's a lot of themes in here that ring true for families and parents and children. There's great things to be taken away from this. It's one thing to be able to entertain people, and we're blessed because we get to do that, I've always felt. But it's another thing, to inform people, or to provoke people, or make them think. 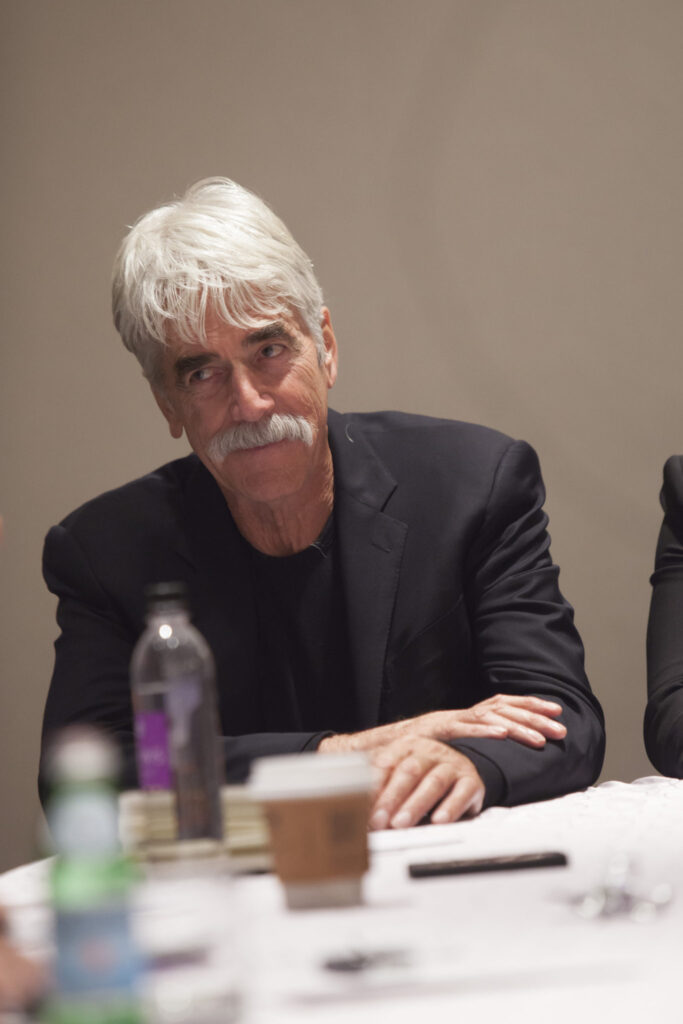 Q: What does it mean to be a part of the Pixar legacy at such an important time for Pixar (20th Anniversary)?

Sam Elliott: I think it's huge. For obvious reasons. It's huge for me, personally, because the 25th of November, if my mother were still living, she passed away three years ago, would've been her 100th birthday. That's a milestone for me. Anytime you get to be involved with a company like Pixar, it doesn't matter what day it is, or date it is, or anything else. This is a gift. I just look at this as a gift, and a grand opportunity over the long haul.

About ‘The Good Dinosaur’

Portions of this material have been provided by Walt Disney Studios. Photos by Patrick Wymore for Disney•Pixar.