In the third installment of MARVEL's popular Norse superhero, we get more than just another film packed full of climactic battle scenes. With new characters, new villains, and one of the funniest storylines we've seen, it's no surprise THOR: Ragnarok is Certified Fresh on RottenTomatoes. Touted as the best MCU film to date, daring, bold, and Hela funny, THOR: Ragnarok is the most enjoyable comedy this year. THOR: Ragnarok is now playing in theaters everywhere!

Known for his funny, incredibly deft films, Director Taika Waititi's brought a new, audacious version of Thor to the big screen, a kind of cosmic space rock opera with a heavy metal feel thanks to a killer soundtrack featuring Led Zeppelin's Immigrant Song. A film less serious and dark than the previous Thor installments, THOR: Ragnarok's humor and tone follow that of the Guardians of the Galaxy franchise.

The laughs take center stage from the get-go as Thor, who finds himself captured by fire demon Surtur, who also proclaims Thor is the son of Odin, replies with a quick, ‘Surtur! Son of a …. bitch!' While there is language in this film, it's mainly adolescent-style humor alongside brief, vague sexual references. In other words, audiences are going to love it!

As much as we love the humor in THOR: Ragnarok, it wouldn't be possible without the return of our favorite allies and foes. Waititi's vision to give Thor a character shift with a new look, sense of humor, and a need for exploration is exactly what we have been waiting for.

For the first time, we find Thor and Loki completely out of their element when the eternally warring brothers are thrown into hot water and must acknowledge their differences to save Asgard.

Thor: Life is about growth and change. But you, my dear god of mischief brother, just want to stay the same.

The Incredible Hulk is back after last being seen rocketing into outer space after the battle of Sokovia, and we couldn't be happier! What's different with Hulk in this film is we start to learn more about his emotional life, his intelligence, and how he lives his day-to-day life. Even Banner is reborn into a new, energetic and adventurous character bringing forth a very different Banner than we've come to know.

The iconic character Hela makes a terrifying entrance as MARVEL's first lead female villain in a film, a character that is not only mean but strikingly snarky. As the god of death invades Asgard and wages a war, we learn more about her connection to Thor, Odin, and the ruins of Asgard.

There's no denying Thor: Ragnarok is a riot, pure and simple. A colorful cosmic journey that will have your family laughing at the non-stop comedy throughout the film. Get your tickets to see this year's most enjoyable comedy now!

13 Fun Facts About the Filming of THOR: Ragnarok

In Marvel Studios’ “THOR: Ragnarok,” Thor is imprisoned on the other side of the universe without his mighty hammer and finds himself in a race against time to get back to Asgard to stop Ragnarok—the destruction of his homeworld and the end of Asgardian civilization—at the hands of an all-powerful new threat, the ruthless Hela. But first, he must survive a deadly gladiatorial contest that pits him against his former ally and fellow Avenger—the Incredible Hulk! 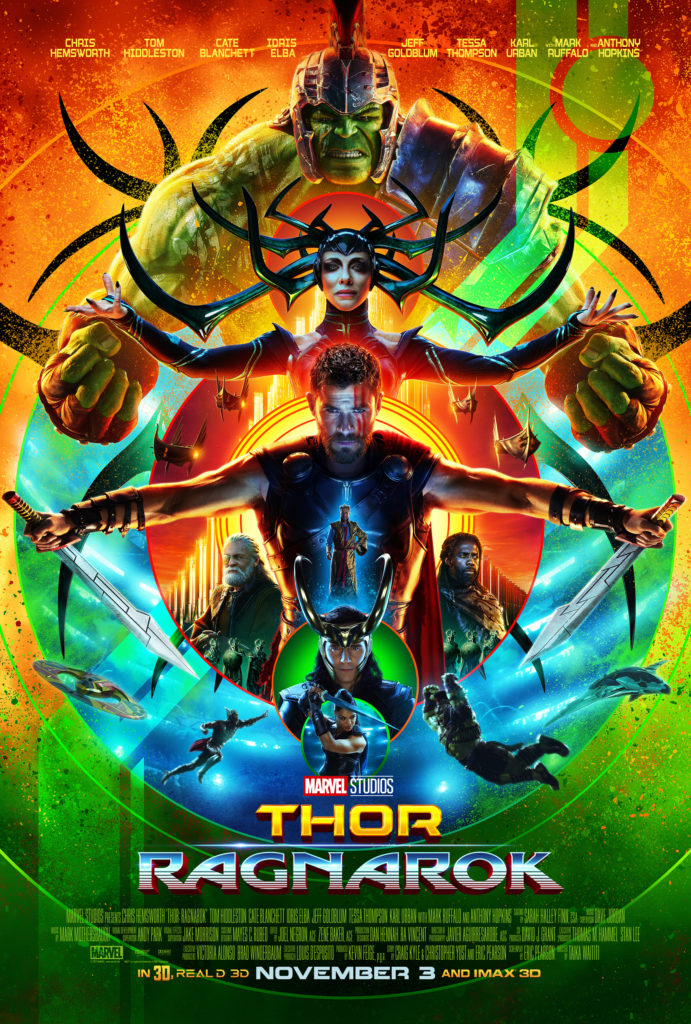